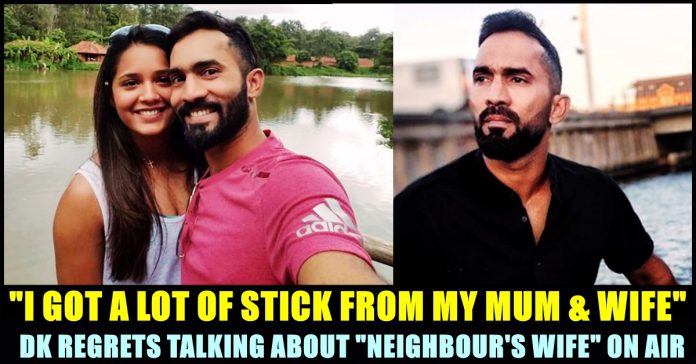 On Sunday, former Kolkata Knight Riders Captain and Indian wicket-keeper Batsman Dinesh Karthik apologized for the comments he made during the second ODI between England and Sri lanka. Karthik said that he wants to apologize for what happened last game and said that it’s not really what he intended. The cricketer also said that he got a lot of stick from his mum and wife for uttering sucg an anecdote.

Tamil nadu based cricketer Dinesh Karthick who is not active playing cricket nowadays, is currently busy doing commentary for International matches. Followed by several seasoned cricketers who switched their career into commentary, Karthick has been impressing fans with his informative inputs and witty lines through his commentary during matches. His job during the final match during the ICC World Test Championship final between India and New Zealand won the hearts of fans in big time and the cricketer has been continuing doing commentary in the England vs Sri Lanka ODI series.

Recently, the cricketer had made the headlines after making a comment on how batsmen would see their bats and the bats of other batsmen. While doing commentary for for the 2nd ODI between Sri lanka and England as a part of the Sky sports panel, Dinesh grabbed the headlines with an unusual anecdotes. The keeper-batsman said that most of the batsmen would see other’s bats as “neighbour’s wife”.

Talking about the need of bat change for batsmen in different situations and circumstances in the game, Karthik compared batter’s appreciation towards others’ bats with a man admiring the wife of his neighbour. “Batsmen and not liking bats, they go hand in hand. Most of the batters don’t seem to like their bats. They either like another person’s bat. Bats are like a neighbour’s wife. They always feel better.” Dinesh Karthick could be heard saying from the commentary box.

The video went viral among the fans with various kind of reactions. It also became a subject to controversy and a set of people condemned him for making such a statement on air. Now, Dinesh, after becoming aware of what’s happening around, came up with an apologize. “I want to apologise for what happened last game. It’s not really what I intended. I just got it all wrong. I apologise to everybody. It’s definitely not the right thing to say,” the right hand batsman said.

“I am really sorry that it shouldn’t happen again. I got a lot of stick from my wife and my mum for saying that,” he added. Karthick’s commentary is being lauded by the fans of the game across the country and comparisons on himself becoming Sunil Gavaskar in the future is also being made. He enjoys a separate fan base for the shirts he wears as well.