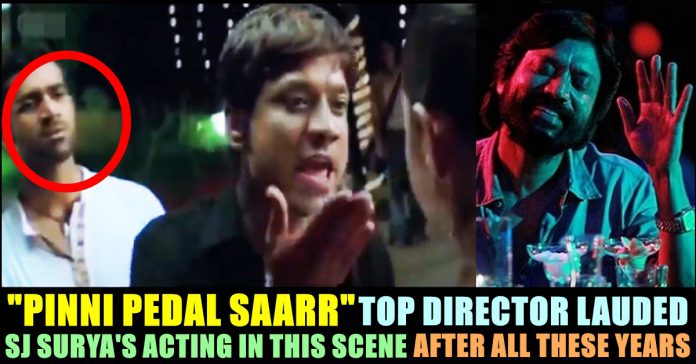 Venkat Prabhu, one of the top director who wielded the megaphone for films like Mankatha, Chennai 28, Masss has appreciated his fellow director and actor SJ Suryah for his acting in “Anbe Aaruyire”, especially his acting in the interval block scene. S.J Surya who is very well known for his directorials, is now busy in acting feel good films. Followed by his adventure drama “Monster”, in which he paired with Priya Bhavani Shankar is again pairing with the actress for a movie which is being directed by “Mozhi” fame Radha Mohan. The film has been titled as “Bommai” and is expected to release post lockdown.

It all started when a fan shared this particular video clipping from the movie “Anbe Aaruyire” which was directed by SJ Suryah himself. In the scene we can see Suryah as a possessive boyfriend who fights with his girlfriend in a restaurant. The scene which was termed as “Sauce scene” by the fans during its release time, became very famous among the youngsters for Surya’s unique way of delivering dialogues and for his animated body language. The scene even recreated by veteran actor Sathyaraj in a movie titled as “Kovai Brothers”

SJ Suryah who saw this tweet, shared it with a heart in eyes and hifi emoji through his official twitter account, in a way of encouraging the fan.

Venkat Prabhu who is yet to be collaborated with this multi talented artist, said that this scene is one of his all time favourite interval block. He further lauded his performance by saying that he nailed it. “One of my all time fav interval block!! Pinni pedal saar!!” read the tweet of Venkat Prabhu.

One of my all time fav interval block!! Pinni pedal saar!!

Actor and Producer Nithinsathyaa replied to this tweet of Venkat Prabhu and expressed his eagerness to witness SJ Suryah in “Nenjam Marappathillai”, one of the shelved project of director Selvaraghavan. The film is expected to get an online release.

SJ Suryah is the director who gave the career break to the toppest rivals of Tamil cinema Ajith Kumar and Vijay. He gave “Vaali” with Ajith and “Khushi” with Vijay. Both of them are considered as two of the finest works of the filmmaker till date. He made his acting debut with New and went on to act in films like Kalvanin Kadhali, Thirumagan, Vyabari, Iraivi and has also acted as Antagonist in Spyder and Mersal. He is expected to be seen in “Iravaakaalam”, “Nenjam Marappathillai”, “Bommai”.

Comment your views on this scene from “Anbe Aaruyire” and about the performance of SJ !!