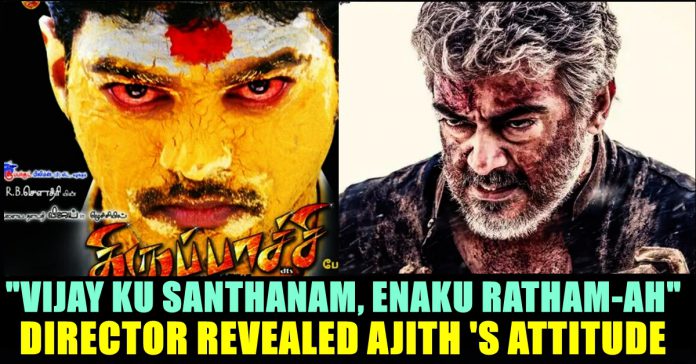 “Thalapathy” Vijay and “Thala” Ajith are two of the most talented actors in the cinema industry of Tamilnadu. The rivalry between both the actors is less as far as the rivalry between their fans is considered.

Its been a long time since actor Ajithkumar and Vijay declared as official rivals. Only on few occasions both these actors movies released together but on that day the opening of both the movies would be a deadly one.

Very few filmmakers have directed both Vijay and Ajith in their career which spans more than 20 years. A.R Murugadoss, SJ Surya, K.S. Ravikumar, A.L Vijay, Perarasu are the directors who worked with both the actors. Director Perarasu is one of the notable director who wielded the megaphone when both the actors did acting. He directed Thiruppachi and Sivakaasi of Vijay and did Thiruppathi with Ajith.

Now the director has revealed an interesting incident that happened in the shooting spot of “Thiruppathi” with actor Ajith. Defining about their relationship, Perarsu said that they are considered as rivals only by the fans. “But they are very jovial and friendly within themselves” he said in the interview.

“Ajith will talk very humorously regarding the so called rivalry. In one of a scene in Thiruppathi Ajith was supposed to escape from an hospital. For that he was required to cover his face with blood. While applying the blood he asked me why I let Vijay to apply sandal powder in his face” said Perarasu who added that Ajith told it in a humorous way. “He won’t be having anything against Vijay in his heart” he said.

Further he added that Ajith would ask about the making of Ajith’s movies. “He asked me how Vijay accepted certain scenes. Everything he asked was only to gain knowledge. There will be no enmity in his way of asking questions.” he said. Perarasu is also one of the front runner for Thalapathy 65. When he was asked about it, the filmmaker said that he has prepared a script and added that everything depends on the decision of the “Bigil” actor.

Both the actors are praised for their respective skills and has separate fan base as we all know. Ajith who is known for his screen presence and has set the screen on fire while making his entry in his films. Meanwhile Actor Vijay known for his exceptional dancing skill.

What do you think on this interview of Perarasu ?? Comment your views below !!