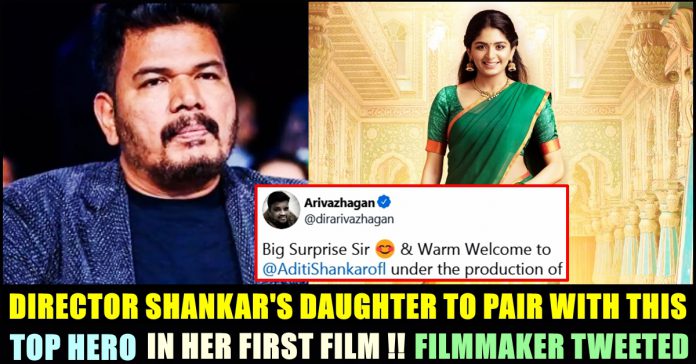 Daughter of Tamil cinema’s one of the prolific filmmaker Shankar is going to debut as heroine through actor Suriya’s production venture which features his brother Karthi in the lead role. “Komban”, “Kutti Puli” fame Mutthaiyah is going to direct the film which is titled as “Viruman”. As soon as the news surfaced in the Internet, many who belong to the Kollywood film industry came up with tweets wishing Adithi Shankar luck. Director Shankar confirmed the same by uploading a tweet through his official twitter handle.

Director Shankar’s eldest daughter Aishwarya, a doctor, had recently got married to a cricketer named Rohit Damodaran. who is known for playing in Tamil nadu premier league. After bankrolling Karthi’s rural blockbuster “Kadaikutty Singham”, the Suriya-Jyothika duo once again came forward to produce “Viruman” which is touted to be a rural drama. It has been reported that Director Yuvan Shankar Raja is going to compose music for the 2 D’s production venture. Yuvan and Karthi combo is known for some of the chartbuster albums such as “Paiyaa”, “Naan Mahaan Alla” etc. The duo is joining hands after 8 long years as the last film they worked together is “Biriyani”.

“Viruman” which is going to be shot in and around of Theni, reportedly going to talk about family and relationships. Raj kiran is expected to play a crucial role with Soori and Prakash Raj supporting the cast of the film. The film is going on floors from Monday with a Pooja win Chennai. Director Shankar, aconforiming about his daughter’s upcoming venture, came up with a tweet writing “Thanks dear
Suriya & Jyothika for launching Aditi Shankar through 2D Entertainments which always delivers quality movies! Thanks to Karthi. I believe cinema lovers will shower her with love as she comes fully prepped to make her debut.”

“So excited to have signed for this project. I couldn’t have asked for a better team to debut with. Blessed with the best” Adithi Shankar said in her tweet about her debut and went on to add “Thank you so much Suriya sir and #jyothika ma’am for this opportunity. Will make you proud and give my 100 % hard work!”

Great sir 👍 All the very best @AditiShankarofl
All your dreams will come true!!💐💐💐 https://t.co/LMU1pW73YD

Big Surprise Sir 😊 & Warm Welcome to @AditiShankarofl under the production of quality movies and Heartiest wishes for Her Bright Future Sir 💐💐💐 https://t.co/x3rmyh6M5u

She looks gorgeous and I’m sure she will do great. Congratulations and all the best