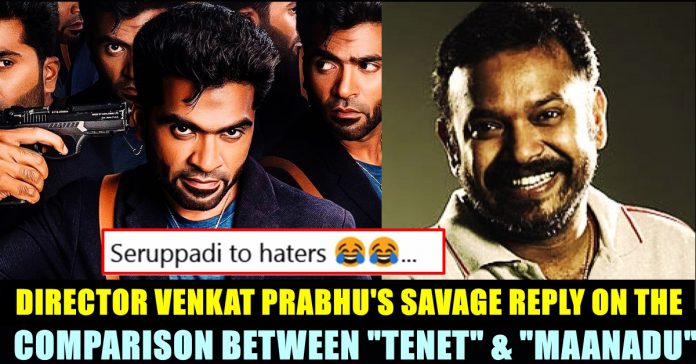 On seeing the comparison being made by fans in social media platforms between “Maanadu” and “Tenet” after the teaser of the Venkat Prabhu directorial’s release, the filmmaker came up with a reply asking the fans to wait for the trailer. In a lighter manner, the “Mankatha” maker has said that he himself couldn’t understand Christopher Nolan’s “Tenet” and said that he feels honoured on seeing his film being compared with the legendary filmmaker’s latest film.

The most awaited teaser of Venkat Prabhu’s upcoming film “Maanadu” released on youtube to celebrate Simbu’s 38th birthday. The film marks the first collaboration of Venkat Prabhu and Simbu as a director and protagonist respectively. In a previous occasion, Simbu did guest role in the filmmaker’s third directorial “Goa”.

The teaser of “Maanadu” exhibits a 75 seconds video consisting Simbu, SJ Surya, Kalyani Priyadharshan, Bharathi Raja, S.A Chandrasekhar in reverse version. “Time does not wait for anyone” is what highlighted in the teaser and the plot seems to be revolving around the tale of money and muscle power.

Simbu who plays Abdul Khaliq in the film, looks dapper in his never before seen look and the teaser promises a complete action entertainer. The compilation of a series of reverse shots, triggered fans to predict the story of “Maanadu”. Meanwhile, a number of fans who watched Hollywood filmmaker Christopher Nolan’s recently released “TENET” started comparing Maanadu’s teaser with it.

Hashtag #Tenet was trending in the micro blogging social media site with thousands of tweets comparing the two films. In Tenet, a secret agent is given a single word as his weapon and sent to prevent the onset of World War III. He must travel through time and bend the laws of nature in order to be successful in his mission.

On seeing Simbu doing stunts in reverse action, similar to the protagonists of “tenet”, one of a fan wrote “Tenet trending because of STR and VP!” whereas many others trended funny memes and reactions. Now, responding to all the memes and reactions, Venkat Prabhu came up with a tweet in his official twitter account where he enjoys 32 lakh plus followers.

The filmmaker confirmed that both the films are no way connected by writing “I am very honored that people are comparing our #maanaaduteaser with #tenet but unfortunately this ain’t connected with it!To be honest even I didn’t understand #tenet, wait for our trailer!Then u might compare us with some other film!! ;)) #aVPpolitics” in his tweet.

I am very honored that people are comparing our #maanaaduteaser with #tenet but unfortunately this ain’t connected with it!To be honest even I didn’t understand #tenet 😁 wait for our trailer!Then u might compare us with some other film!! ;)) #aVPpolitics https://t.co/Xle3hiWh6Q

“Maanadu” is expected to be the come back of both Venkat Prabhu and Simbu. Richard Nathan is committed to do the cinematography for the film and Praveen is doing the cuts. The music department is going to be led by Yuvan Shankar raja and the film is being produced by Suresh kamatchi.

Check out some of the reactions for VP’s tweet :

We stand with you @vp_offl anna no worries . Do ur best 👍💯