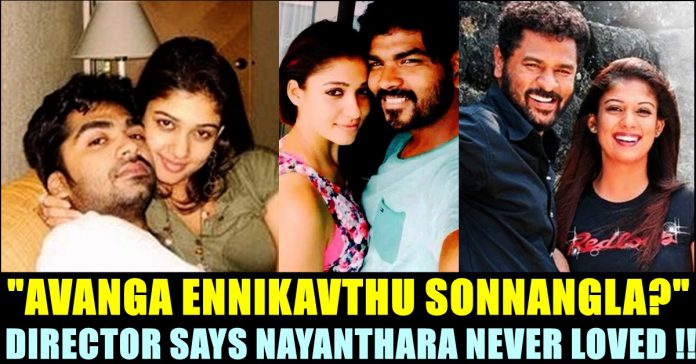 Director of Simbu’s unreleased film “Kettavan” has made a sensational statement about actress Nayanthara and her alleged relationships. Director Nandhu was supposed to direct Simbu’s “Kettavan” which created huge expectations among fans during the prime time of Simbu. He who introduces himself as Simbu’s friend who travelled with him for a long time has said that he is not sure about whether Nayanthara loved Simbu or not.

“We audience only calling it as “love” and “relationships”. Have you ever seen Nayanthara declaring her relationship status ??” asked Nandhu to the anchor who asked him about the reason behind the break up of Simbu and Nayanthara. “I am 100 % sure that Simbu loved Nayanthara as I have travelled along with him for a long time. But did Nayanthara say that she is in love with Simbu anywhere ?” he continued asking.

“They are also saying that she loved Prabhu Deva. Did she confirm that anywhere ? Any girl can take picture with any guy she likes. She can go out with him. She can travel the world along with him. But we can’t conclude that as a relationship. Even with Vignesh Shivan, people are saying that she is going to marry him. Did Nayanthara ever say that she is going to marry Vignesh shivan ? No chance at all” said Nandhu in the interaction.

Watch the video below from 7th minute :

Further Nandhu said that Nayanthara had treated them only as a friend. But those men who maintained a close relationship with her are falling in love with them. I feel Nayanthara is trapped in a society with polluted mindset” said Nandhu about the 36 year old actress’s personal life.

However, Director Vignesh Shivan with whom Nayanthara is being involved in a live-in relationship,uploaded a post of Valentines day saying that his life filled with love and affection after meeting Nayanthara 5 years ago. He posted a series of pictures of himself with the actress.

Nayanthara is one of the very few female actors who rules Tamil film industry for more than 15 years. Being the highest paid actresses of South Indian film industry, Nayanthara is also the only actress who manages to act in both female centric movies and hero oriented movies. The surprising fact about it is that the “Bigil” actress shines in both the regions. Recently she received favourite actress award for acting in”Bigil” and “Viswasam” in the Zee Cine Awards.