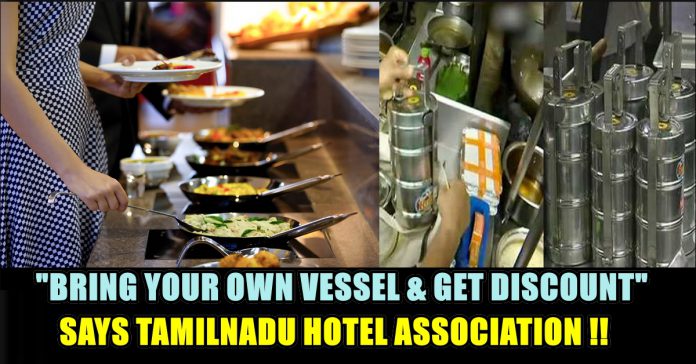 Here’s some food for thought served in a pocket-friendly manner. The Tamil Nadu Hotels Association has announced a 5% discount on the bill if customers bring their own utensils and bags for food parcels. The association, with over 10,000 members, has passed a resolution to this effect. “On an average, each food parcel costs us around 3% to 4% of the bill amount. If customers bring their own utensils, they can benefit. We have asked members to put up boards at their restaurants informing the customers about the offer,” said M. Ravi, president, Chennai Hotels Association.

There are around two lakh hotels with restaurants, stand-alone restaurants and eateries in the State. “People in places like Vellore, Chidambaram and Madurai have already started requesting customers to bring their own utensils. It will bring back the era of the ‘carrier meal.’ Some 40 years ago, every home had a brass or stainless steel carrier, and it was a travel companion. But after the advent of plastics, the humble carrier was given a farewell,” said R. Srinivasan, Association secretary.

The discount move follows a Tamil Nadu government order banning single-use plastics from January 1, 2019. Takeaways make up a big portion of food sales, and the association says its decision would reduce the use of plastics substantially.

But some restaurants are also pushing the envelope in their fight against plastics. They are now packing food in banana leaves and thaiyal ilai. “We are looking at alternatives like aluminium foil and cardboard boxes since not everyone can bring their own utensils,” said Vishnu Shankar of Adyar Ananda Bhavan in Chennai.