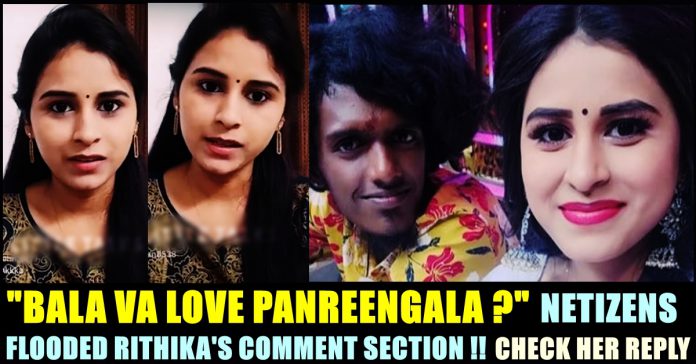 Tamil television actress Rithika who is known among audience for appearing in the shows and serials that are being telecasted in Vijay TV, answered to fans who asked whether she is involved in a romantic relationship with Bala, a renowned comedian of the same television. While interacting with her Instagram followers, Rithika who faced many questions regarding the same, advised audience not to take things personally that are being done of content.

Rithika is currently enjoying 1.2 million followers fro her official Instagram account and is acting in serials such as “Bakkiyalakshmi” etc. So far, she has uploaded 632 posts in the photo/video posting platform and is updating her followers about her works, daily routines, future projects etc through it. Reels and pictures from her photo shoots also could be seen in her timeline. She is also involved in promoting brands through her Instagram space. Check out some of her recent posts below :

She rose to fame among audience after appearing in the second season of “Cooku with Comali” in which comedian Bala is a prominent contestant. In a recent live Rithika conducted, many started asking her whether she is in love with Bala through their comments.

Initially Rithika said “Bala is my friend. He is a good friend of mine. So please see a content as it is. Stop connecting things that you watch in Television to reality. That’s good for all of us. He is a very good friend of mine” to the followers who dropped comments on her Instagram live regarding her relationship with Bala.

After a while, on seeing many flooding her comment section with the question on whether she is loving Bala or not, Rithika said “Many are asking the same question on whether I am loving Bala or not repeatedly. I don’t know what kind of question it is. We are doing content for a television. We would like you people to watch it that way. We want you people to feel happy by watching it only as a content. Me and Bala are good friends. I wish to tell you the same”