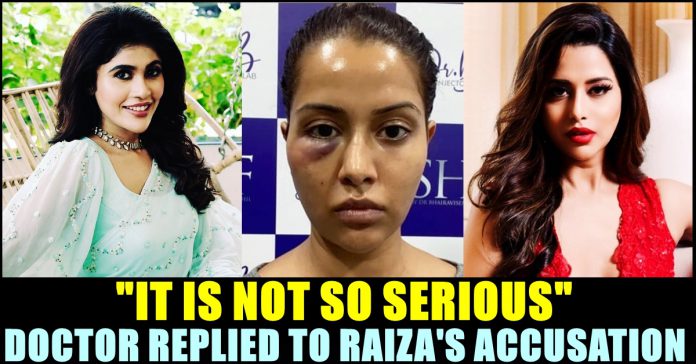 Followed by the accusation made by Tamil actress Raiza, Dr. Bhairavi Senthil who treated her through her Skin health foundation released a press note saying that Raiza had no complaints after undergoing the same treatment in previous occasions. She who dubbed the bruises as “minor side effects”, said that it will heal naturally within few days and added that it won’t cause damages to the skin.

On Saturday, Raiza uploaded a picture of herself suffering a deep swell in one of her eyes and said that she visited Dr. Bhairavi Senthil whose Instagram bio says that she is a Dermatologist, CEO, Medical director of Skin health foundation for a simple facial treatment.

The actress said that Dr. Bhairavi Senthil forced her to do a procedure that she didn’t need. Raiza said that the picture she uploaded of herself is the result of the procedure. Raiza also said that Bhairavi Senthil refused to meet or talk to her today and her updated about her staff’s response. Raiza has been informed that the person who forced her to go through a treatment which she didn’t intend to, left the town.

Now, replying to the accusation of the actress, Dr. Bhairavi Senthil released a press note in her official Instagram account. “This is with reference to the picture of Ms. Ryza Wilson in Instagram and other social media with regard to a clinical procedure, which she had undergone in our clinic on 16.0 4.2021. The said clinical procedure is more a cosmetic application of skin
treatment. The said clinical procedure involves administration of substance in the facial skin to enhance and rejuvenate the skin cells. The said procedure is done only with due written consent of the person, who shall sign the necessary forms and declarations. The procedure will be clearly explained to the person before administration of the substances and all clinical processes and the same shall be in strict compliance of the medical rules and procedures governing the same.” read the statement of SFE owned by Dr. Bhairavi Senthil.

“The said Ms.Ryza Wilson, who had undergone such clinical procedure several times earlier and had no complaints, but after the treatment in the last occasion on 16/4/2021 had developed bruises as minor side effects, which shall appear in selective or rare cases, if the precautions and medical advice is not strictly followed. The said rupture is not so serious or critical and the same shall subside and heal naturally within few days and shall not cause damages to the skin. Ms.Ryza Wilson who is well aware of these facts has purposely made a statement and published her photograph in order to
defame our clinic, which is well established and reputed and had earned great accolades and appreciation from the public with regard to skin treatment and other dermatology care.” the press statement further read.

“The statement made by Ms. Ryza Wilson is derogatory and had grossly affected the name, reputation of mine and my clinic. Therefore, I am constrained to initiate legal proceeding against Ryza Wilson and shall claim apology and suitable compensation for the said defamation, loss and mental agony suffered by me, for which Ms. Ryza Wilson alone shall be liable. I assure that our treatment and services are the best amongst the dermatology clinics and therefore public are requested not to panic and have aspersions due to the said derogatory statement by Ms. Ryza Wilsorn, which is nothing but mischief done against me. I request your support and patronage as before and I shall always provide you the best of my clinical experiences forever.” the press note read. Also Read : “Do I Look Hot ??” Raiza Asked Her Followers !!