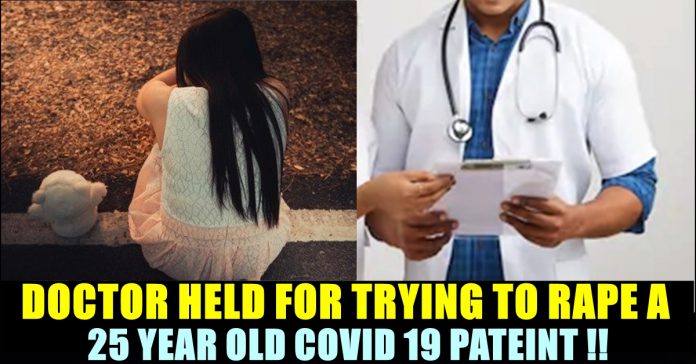 After a number of reports on COVID 19 female patients getting molested and sexually harassed in quarantine, now a shocking news on a Doctor being arrested police for trying to rape a female COVID 19 patient has been surfaced. The incident took place in Deen dayal hospital located in Uttar pradesh’s Aligarh city on Wednesday. The 30 year old doctor was arrested on charges of molesting and attempting to rape a 25 year old COVID 19 patient. The victim was recuperating in the isolation ward after being tested positive for COVID 19 when the incident happened.

The accused named as Tufail Ahmed, touched the private parts of the girl on the pretext of examining her on the night of Tuesday, the complaint of the victim mentioned. On Wednesday morning, the doctor visited her again and repeated the same thing, added the girl’s allegation.

“We received a complaint from a woman patient admitted at Deen dayal hospital alleging that a doctor sexually assaulted her within the hospital premises. The doctor, who himself was in quarantine, was arrested. We are questioning hospital authorities. Further investigation is on” said a senior policer to media.

The working woman who belongs to Delhi, visited Aligarh to meet her relatives. On Monday, she who developed symptoms, sent her samples for a test and was admitted in hospital on the next day after being tested positive. Based on the complaint she made, Police went through the CCTV footages of the hospital and found the doctor entering the isolation ward without wearing gloves and PPE kit.

Anil Samaniya, circle officer of Civil lines police station, said that the doctor has been booked under sections 376 (2) d (takes advantage of his official position and commits rape on a woman in his custody), 354 (molestation) of IPC at Kawarsi police station.

Ranjeeth Singh, additional city magistrate visited the hospital as a part of the inquiry. He said that a report has been sought from the chief medical superintendent of the hospital and it will be submitted to the state government for further action.

Recently, a 14 year old teen girl who is a COVID 19 positive patient was sexually assaulted by two other men who are also COVID 19 patients. The incident happened at The Sardar Vallabhai Patel corona care centre located in South Delhi. It is the biggest quarantine facility in the city. “When the victim went outside the female ward to the washroom, the boys who were roaming in the corridor molested her. When she started screaming, the accused fled only to get caught by the security guard who alerted the police” officers of police department said. They were arrested five days later after they tested negative for COVID 19.

Earlier, a shocking crime of COVID 19 positive patient raping a woman took place in a quarantine center located in Navi Mumbai on July 16. The 40 year old victim was lodged at the quarantine centre as COVID 19 suspect whereas the accused was a visitor. By using the advantage of his intimacy with the woman, the 25 year old man visited the woman on a evening and raped her. After the result came, it has been identified that the victim has been tested negative and the accused tested positive.