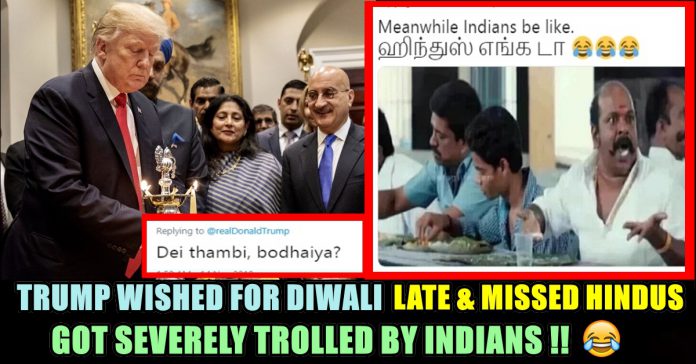 US President Donald Trump celebrated Diwali, the festival of lights, in the White House on Tuesday, where he participated in the ceremonial lighting of diyas. However, the US President managed to generate yet another controversy after he forgot to greet Hindus – the largest community in the world that celebrates the festival  – in his tweet about Diwali. 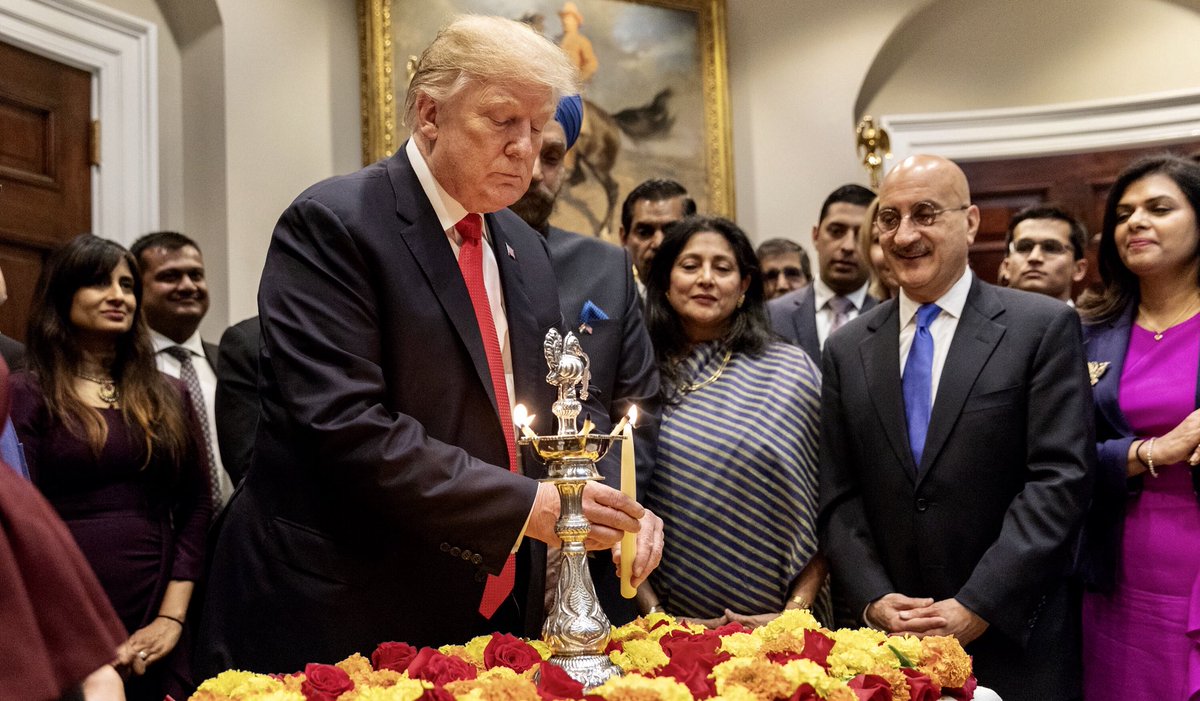 Trump hosted Diwali celebrations in the historic Roosevelt Room of the White House which was attended by prominent Indian-Americans, Indian-origin administration and diplomatic officials.

Diwali was celebrated across the world on November 7. In his first tweet, he forgot to greet the Hindus, for whom Diwali is the biggest festival in the calendar.

In fact, it took President Trump three attempts to finally get his tweet right – a fact that did not go unnoticed by many netizens, who promptly trolled the President for yet another faux pas. Initially, the official Twitter account of President Trump posted a tweet that read, “Today, we gathered for Diwali, a holiday observed by Buddhists, Sikhs, and Jains throughout the United States & around the world.” 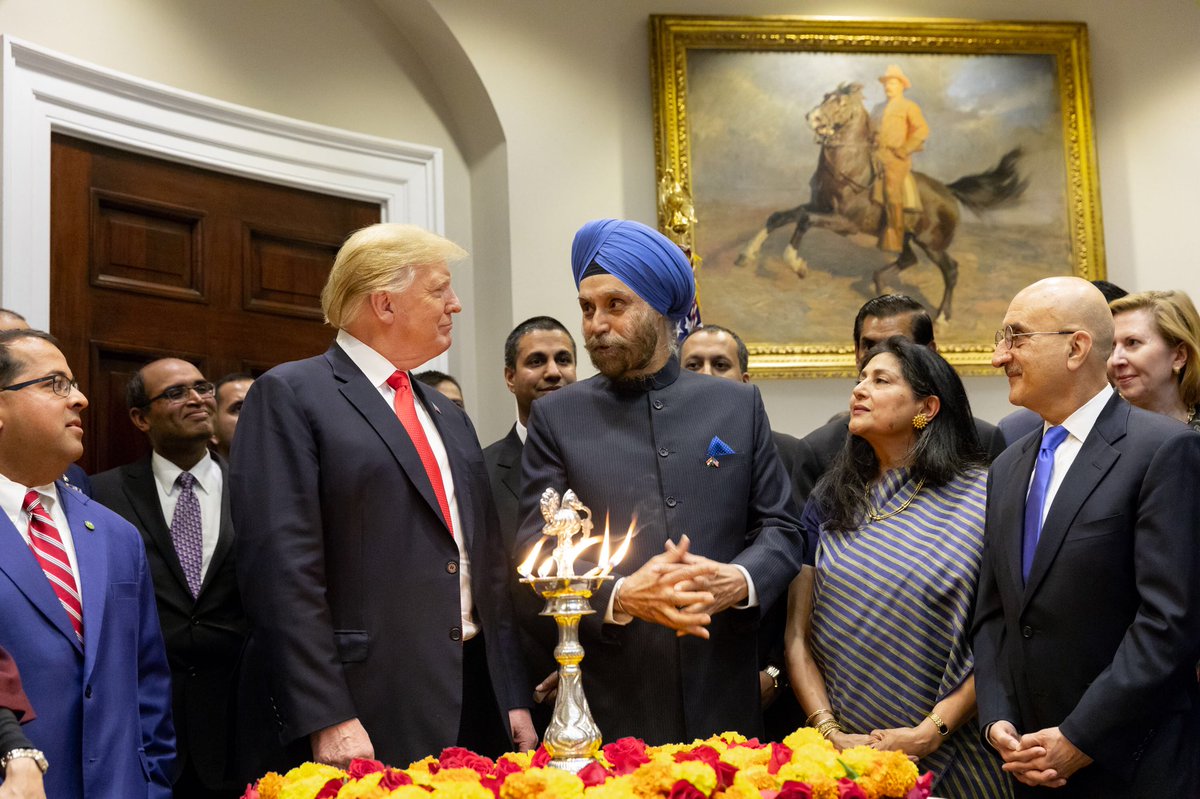 Several Twitter users were quick to point out that Trump had obviously missed wishing Hindus in the tweet, the post was deleted and a fresh tweet was put up instead. However, in a comedy of errors, the second post tweeted by President Trump also omitted the mention of Hindus.

Today, we gathered for Diwali, a holiday observed by Buddhists, Sikhs, and Jains throughout the United States & around the world. Hundreds of millions of people have gathered with family & friends to light the Diya and to mark the beginning of a New Year. https://t.co/epHogpTY1A pic.twitter.com/9LUwnhngWJ

Finally, President Trump posted a third tweet in which he mentioned that he was honoured to host a celebration of Diwali, a “Hindu festival of Lights.”  He added in his tweet, “Very, very special people.”

It was my great honor to host a celebration of Diwali, the Hindu Festival of Lights, in the Roosevelt Room at the @WhiteHouse this afternoon. Very, very special people! https://t.co/kQk7IvpSFo pic.twitter.com/tYlBABg4JF

How on earth did he forget the Hindus, when Diwali is majorly a Hindu festival? The pictures showed the Indians working at the White House surrounding Trump as he lit a lamp. Yet, a large number of Netizens trolled Trump for having forgotten the Hindus.

Next he’ll wish happy Hanukkah to the Mormons.

Even Wikipedia could have helped “Diwali is celebrated by Hindus, Jains, Sikhs and Newar Buddhists, although for each faith it marks different historical events and stories, but nonetheless the festival represents the same symbolic victory of light over darkness”

Diwali is a Hindu festival ! We Sikhs celebrate Bandi Chhor Diwas ! We celebrate a historic Sikh event of our sixth Guru, Guru Hargovind Singh Ji 🙏🏼 Please don’t combine a majority with others, we have a different religion and believe on equality ! @realDonaldTrump

No wonder India is known as a land of Budha to the world the truth which Indians are forgotten.

When he1st began he did say “Hindus” then got distracted with the CA wildfires. After that he began reading his statement which mentioned Buddhists, Sikhs & Jains, but not Hindus. Diwali is the Hindu Festival of Lights it symbolizes the victory of light over dark, good over evil.

You’re a week late and forgot to mention Hindus.

You forgot the Hindus, genius. Thanks.

I laughed and sighed at this at the same time. pic.twitter.com/o3PBOyXIxP

I thought he spoke #Hindu! https://t.co/17rkbnmWm9

Meanwhile, at the event, Trump lauded India as “best trade negotiator” and emphasized that the Indo-US relationship was stronger than ever. Calling Prime Minister Narendra Modi “ a friend”,  Trump said, “The United States has deep ties to the nation of India and I am grateful for my friendship with Prime Minister Modi.”