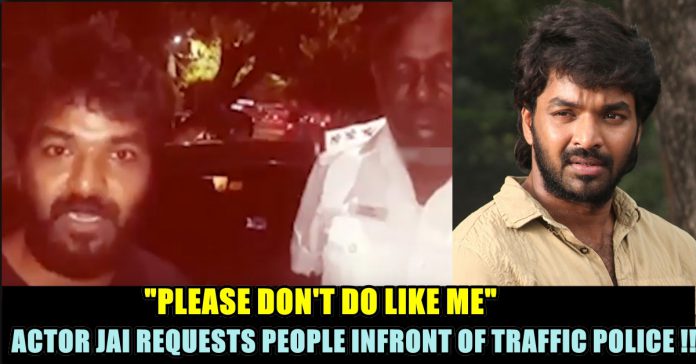 Jai Sampath, known mononymously as Jai, is an Indian actor working in Tamil films. The nephew of music composer Deva, Jai had worked as a keyboardist in films and had made his acting debut in a supporting role in Bagavathi (2002). In 2007, he successfully auditioned for a leading role in Venkat Prabhu’s  sports film Chennai 28. The film emerged as a cult classic , as did his next role of an unemployed 1980s Madurai lad in Sasikumar’s Subramaniyapuram (2008). Jai subsequently garnered praise for diverse roles, including a villager on holiday in Goa(2010), a timid working factory worker in Engeyum Eppothum (2011) and a customer care executive in the romantic drama Raja Rani (2013), which became his biggest commercial success.

After Raja Rani few films of him such as Tamilselvanum Thaniyar Anjalum, Naveena Saraswathi Sabatham, Enakku Vaaitha Adimaigal released which did not do well in theatres. His last released film was Director Sundar C’s Kalakalappu 2. Actor Jai is one of the controversial actors of Kollywood after Simbu. He was rumoured as not attending the shoot regularly for the film Balloon. He also accused legally in a drunk and drive case. In that case the police said that Mr. Jai and Premgi Amaren, along with a few other film artistes, partied at a star hotel in Nungambakkam till 2 a.m. Later, he left for his house at Indira Nagar along with his friends. When the car was on the Adyar flyover, he lost control and rammed the divider. The traffic police removed the vehicle. Using a breath analyser, the police found that he had been drinking. Mr. Jai was booked under Sections 185 (driving by a drunken person or by a person under the influence of drugs) of the Motor Vehicles Act and 279 (rash driving or riding on a public way) of the Indian Penal Code. Sources said the actor was booked in 2014 after his vehicle rammed a median near Kasi Theatre. The police have recommended the cancellation of his licence. Now a video surfaced on Internet in which he is seen advising people not to use silencer like he is using. It seems the traffic police was asked Jai to do a video about the consequences of using noisy silencers for car inside the city. Watch the video below :

Well , what do you think on this video of actor Jai , comment below.