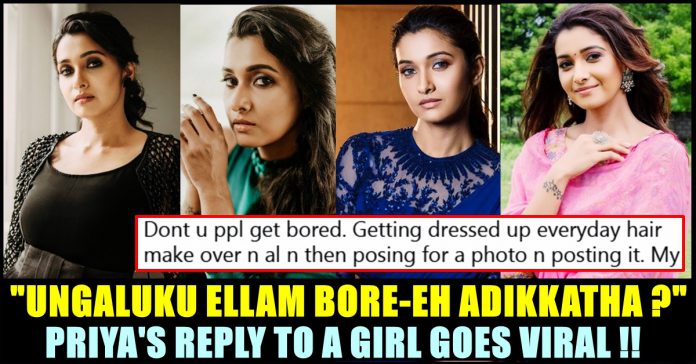 Actress Priya Bhavani Shankar’s reply to a follower who asked whether she wouldn’t feel boring to dress up, do make overs and pose for pictures in a daily manner, is going viral among the users of the micro blogging social media site. The actress said that she getting “handsomely paid” for doing that which wouldn’t make her feel bore. The tweet is getting wide reach in no time with several kind of reactions from her followers.

Priya Bhavani Shankar made her entry into media industry as a Television News presenter in Tamil Puthiya Thalaimurai News Channel. She became very popular after started acting in serial named “Kalyanam Mudhal Kadhal Varai” which got telecasted in Star Vijay Television. She began her career as a software engineer at Infosys, after her Bachelor’s Degree in Electronics and Instrumentation Engineering from B.S. Abdur Rahman Crescent Institute of Science and Technology. After entering the media industry she did her Master of Business Administration.

The actress who gained many fan pages in social media platforms in a very short span, has a separate set of fan following for her acting and screen presence. So far she paired up with Vaibhav, Karthi, SJ Surya and Arun vijay. Her films such as Indian 2, Oh Manapenne, Kuruthi aattam, Bommai are awaiting for release.

The actress is pretty much active in social media platforms with enormous number of followers. She is enjoying 1.6b million and 3 and half lakh followers in Instagram and Twitter respectively. On Monday, she uploaded a series of pictures of herself from one of her recent photoshoots and tried to provide Monday motivation to her followers.

Even though it’s Monday, act like it’s Friday🤩 pic.twitter.com/9CRvRF7kZM

Among the many who “liked” and reacted to her post, a female follower named “Preethi Agnes” came up with a comment asking whether she is not feeling bored to dress up and pose for pictures everyday. “Dont u ppl get bored. Getting dressed up everyday hair make over n al n then posing for a photo n posting it. My genuine doubt.” read the reply of the user.

Dont u ppl get bored. Getting dressed up everyday hair make over n al n then posing for a photo n posting it. My genuine doubt.

Reacting to the comment, Priya replied saying that it didn’t bore her as she is getting “handsomely” paid for it. “Totally Hear you! and my genuine answer would be ‘Not when you are handsomely paid for it’” Priya’s reply read. Check it out below :

Totally Hear you! and my genuine answer would be ‘Not when you are handsomely paid for it’ 😀 https://t.co/hnQD9ZWfzy

Check out some of the reactions for her tweets below :

Do they give money for photoshoot too? 🙄