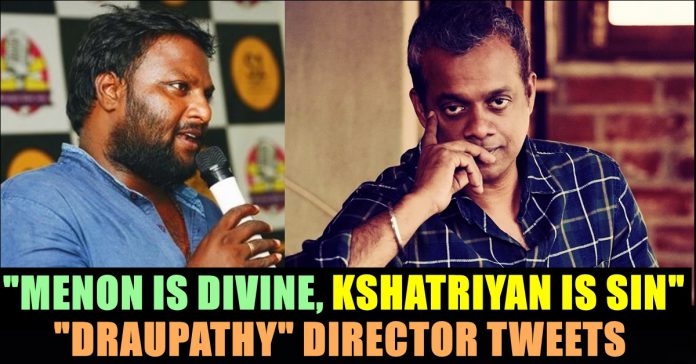 Mohan G, director of “Draupathy” film questioned the caste identity in popular director Gautham Vasudev Menon’s name. He who is getting highly criticized by online users for identifying himself as Kshatriyan (a caste name in Tamilnadu), has sarcastically pointed out why people are not questioning Gautham Menon as his identifying himself as “Menon” from his very first film.

“Draupathy” is one of a most controversial film of year 2020 as it is widely believed as a film that romanticizes casteism. The film which had actor Richard, brother-in-law of actor Ajithkumar, in the lead role became a subject to controversy since the trailer of it released. However, it is also one of the most profitable films of the year. Made with a budget of less than a crore rupees, the film earned more than 14 crore, according to reports. The maker of it is very much known for his presence in the micro blogging social media site.

Recently he posted a tweet expressing the disappointment towards Gautham Menon’s short film “Karthik Dial Seidha Enn”. By tagging the official twitter account of Gautham Vasudev menon, Mohan G said that many young people are following what he shows in his films. “Don’t try to poison their minds.. Jessieroy , I need you at any cost for relieving my depression. As a fan this is my request sir.” his tweet read.

@menongautham sir.. Many youngsters following your movie, style, dialog deliveries, movie making pattern, song grabbing mind, hand kada everything.. Don’t try to poison their minds.. Jessieroy , I need you at any cost for relieving my depression. As a fan this is my request sir.

Followed by this, he posted another tweet accusing people who are seeing Gautham “Menon” as divine and “Kshatriyan” as sin. “Poralis logic “Menon is divine : Kshatriyan is sin” Pongada dei…” his tweet read.

It is notable that Mohan G, in his Twitter bio, added Kshatriyan as one of his identity along with Tamizhan. Check out the screenshot of his twitter bio below :

This post garnered wide attention from the users of twitter as many of them came up with replies to express their opinions. Check out some of them below :

Menon or kshatriyan..if you think you are superior than others by birth, then it is a ” SIN”.
dot.