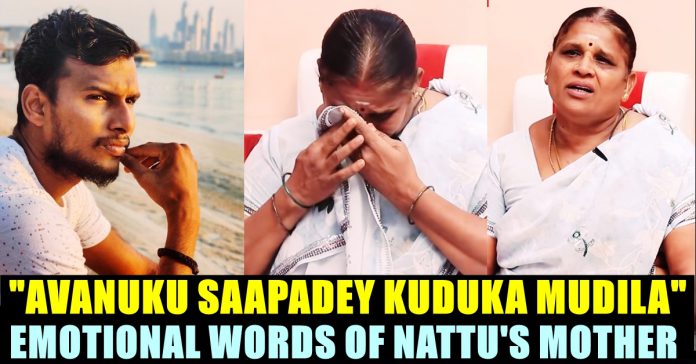 Parents of Natarajan who is currently representing Team India and impressing the fans with his bowling abilities, appeared in an interaction with media for the first time. Shantha and Thangarasu who gave birth to Natarajan, looks extremely happy as their son who struggled a lot during his childhood is finally seeing the light.

Nattu who got the opportunity to represent team India in the ODIs, picked two wickets with an economy of 7 runs per over. Entire Tamil nadu went gaga over Natarajan’s first International wicket against Australia in his debut T20 match. Along with fans, cinema actors, political personalities and sports experts lauded the left hander’s performance in his debut match. In his debut T20 international, Nattu picked three important wickets by conceding just 30 runs in the four overs he bowled. In the second match, he conceded just 20 runs by picking 2 important wickets.

Cricket experts and fans highly believe that Natarajan is an excellent find of this year’s IPL and comparing him with the legendary left hand seamer of India, Zaheer Khan. Nattu is expected to replace him by improving his abilities. Now, his parents who appeared in an interview with Behindwoods, shared many things about the raise of the 29 year old as an International seamer.

“Since he was studying sixth standard, his interest towards the game of cricket is immense. He won’t even have food and would keep playing cricket till 8 in the night. We only managed to educate him till 12th standard. Our finance was very tight at that time. Jayaprakash is the one who nurtured his cricketing skills” said Nataraj’s mother.

While talking about the struggle they had in raising Natarajan, Nattu’s mother said that they couldn’t afford a shoe for him to play. “We couldn’t even afford a shoe for him and couldn’t buy new clothes for him. At that time, we couldn’t even feed him well. He went through all such struggles and now achieved this success. We feel really proud while talking about the struggle he went through to achieve this” she sheds tears.

“We also couldn’t give him the 5 rupees he needed for the bus. We struggled hard financially. Saving his life was a big deal for us at that time.” she says. “While we were struggling like that, no one came to see us. No relative came to see us or to talk with us. They won’t even ask us about our well being for the sake of it. We fell and got up on our own.” she shared.

“Now, after knowing that we are doing good, people who won’t even know us before are greeting by mentioning Natarajan’s name. We were the same back then but they didn’t care. No people invited us for the functions that are being conducted in their homes. Now after our son got featured in IPL, people we don’t even know inviting us for their functions.” Natarajan’s mother Shantha said.

Watch the interview below :

Natarajan’s father is a Saree weaver and his Mother ran a road side shop where people fell in love with her beef fry. He was the eldest of his five siblings. In the year 2011, Natarajan came to Chennai from Chinnappampatti to pursue his cricketing career. In his earlier days, Natarajan represented several villages in the tennis ball tournaments. Natarajan is a big name among the villages for his performance in the 6 over a side Tennis ball tournaments. After having an excellent IPL tournament, Nattu looks promising to grab a permanent place in team India.