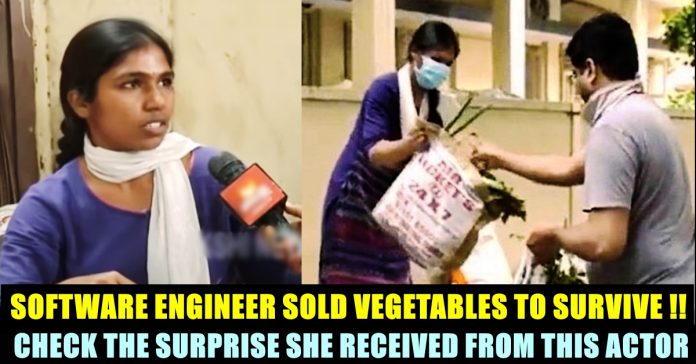 A news on Engineering graduate getting her job back with the help of Bollywood actor Sonu Sood is trending in Internet. All of our plans to improve our financial status in 2020 tumbled in front of our eyes due to this Lockdown implemented by our government as we are having a deadly virus which killed more than 6.5 lakh people across the world at our doorstep. Many people are looking for alternative ways to stay afloat in this Global pandemic. We are even witnessing people who are switching careers altogether to survive.

A 26 year old woman named as Unannadi Sharada who was working in Hyderabad in a MNC company as a software engineer lost her job due to the global pandemic caused by COVID 19. She immediately decided to switch her career and sold vegetables to make ends meet. Thousands of people including IT employees lost jobs around the country. A recent survey reported that 86% of Indians fear of losing their jobs due to the pandemic.

A report of Times of India said that Sharada’s company couldn’t pay her the salary and removed her from her job. Without losing the hope, Sharada decided to sell vegetables in a local market. She wakes up at 4 AM everyday in the morning, travels to the wholesale market for buying vegetables and then sells them on a pavement by spending 12 hours.

Sharada lost her job three months after joining in the MNC company due to the pandemic. The company she was working couldn’t accommodate her in a project to pay her the salary. The youth who lost her job, said that she is not ashamed of selling vegetables. “It was a question of survival, I have been able to pay our house rent, meet all our daily needs and we are able to live an honourable life with our hard work” she said.

Sharada is a graduate in computer engineering graduate who worked as a performance analyst in a company in Delhi for several years. She who thought of doing her own projects, quit her job in Delhi and worked on her own projects for two years. As the project didn’t take off, Sharada joined in the MNC company in Hyderabad. Now, she was forced to leave her job, result of which she is selling vegetables now.

One of a twitter user named as Ritchie, shared the video and asked Hindi actor Sonu Sood to help her. “Dear Sonu Sood sir, She’s Sharada, techie who recently got fired from @VirtusaCorp Hyd amid Covid crisis. Without giving up, She’s selling vegetables to support her family & surviving. Please see if you could support her in anyways. Hope you’ll revert sir” his tweet read.

Dear @SonuSood sir, She’s Sharada, techie who recently got fired from @VirtusaCorp Hyd amid Covid crisis. Without giving up, She’s selling vegetables to support her family & surviving. Please see if you could support her in anyways. Hope you’ll revert sir https://t.co/fNWvljL3DA

Sonu immediately replied with a tweet saying that his official already met her and interviewed her. He also updated that job letter has been sent to her. “My official met her. Interview done. Job letter already sent. Jai hind” read the tweet of the actor.

My official met her.

This news went extremely viral and people are lauding the actor for his immediate help. He who was actively helping migrant workers during the crisis, has been stretching his supportive hand to many other people with the help of social media.