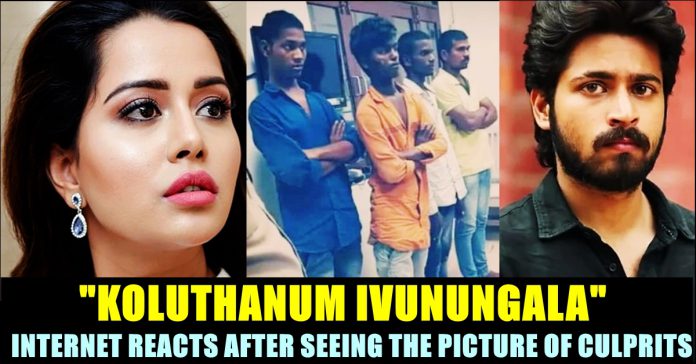 Videos of the culprits who got involved in the crime against Priyanka reddy got released and doing rounds in social media. The four men are seen standing infront of police officers. The video which got surfaced instigated the emotions of people in social media. Many demanded the government to punish them in a never before way to prevent such crimes from taking place in the country in future.

unmasked shots of all four accused in police custody they may appear like boys next door, but they are not, these are monsters who brutalized #DrPriyankaReddy, they deserve no mercy, death penalty is the only punishment they deserve#JusticeForPriyankaReddy #Priyanka_Reddy pic.twitter.com/DgXSdypgzi

Actor Harish Kalyan who is known for acting in films like “Ispade Raja Vum Idhaya Rani yum”, “Pyar Prema Kaadhal” posted the picture of the culprits and expressed his wish of burning them in his official twitter account.

The tweet posted by Harish Kalyan read as “Koluthanum ivanungala!”. Check out it here :

Followed by him, director Pradeep Ranganathan who directed “Comali” also expressed his anger towards the culprits through a tweet. “Enna pannalam ivanglaa…. Oth***”

Actress and Bigg Boss contestant Raiza felt that the boys in the picture looks like no one has ever been gentle to them which made them to commit such cruel crime.

Apart from them, many people who witnessed these pictures got extremely angry and expressed their emotions through their posts .

These are the accused of Dr. Priyanka Reddy case
This is the only thing that does not need much, just burn them alive in front of the public so that someone else thinks 1000 times before doing so pic.twitter.com/iKLKAyu0iF

Pasha, Naveen, Kesavulu & Siva, four accused in the horrific gang rape, cruelly burnt alive a battered verterinary Dr. Priyanka Reddy, near Hyderabad…😡
ALL FOUR MUST BE HANGED!
Ashamed of our human race that has degenerated into demonic mutants.#JusticeForPriyankaReddy pic.twitter.com/SIRyrJBDxM

This huge outrage in Internet is taking place after a 26-year-old doctor was gangraped and murdered in Shamshabad by four men on Wednesday night. According to the Cyberabad Police, the four accused punctured the rear wheel of her scooter, offered to help her, dragged her to a secluded spot close to a toll plaza and gangraped her.

A top police source told India Today TV that the woman doctor was forced to consume liquor-laced cold drink before the crime took place. The doctor died due to suffocation since the accused had closed her mouth and nose during the crime. They later brought petrol from a nearby village and burned her body under a culvert in Chatanpally on the Hyderabad-Bengaluru national highway.