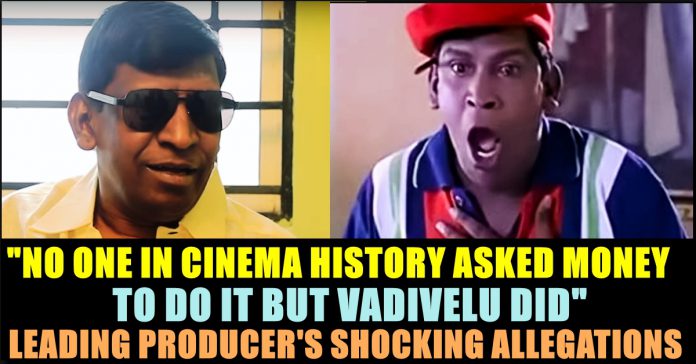 First video interview of Vadivelu after the sensational Nesamani trend has been released by Behindwoods last week. If you have not been living under the rock, you probably must have seen #Pray_for_Nesamani trending online this week. While Netizens around the country were busy praying for the well-being of Nesamani, it left several others quite baffled.

As the trend caused a laughing riot online, the most awaited video interview of Vadivelu has released. In the interview Vadivelu is seen interacting with host by sharing the making of Nesamani and his own inputs for the character.

In the interview The comedy actor shared many thing that happened during the making of Nesamani including how hard actor Vijay struggled to control his laughter while doing their combination scenes. Heaping all praise to director Siddiqui, Vadivelu says ” I wouldn’t like to work with someone who asks me to do what he says. Comedy would not work when you force it. It must have some of the inputs of the comedians”.

He also revealed that he is not comfortable doing film with Chimbu Devan for the way he disrespected him. Now in a way of replying to Vadivelu’s allegations, Amma creations T. Shiva gave an interview to Cinema Vikatan.

In the interview Siva says how Vadivelu changed as an actor from his earlier stage to now. He also shared an incident where Vadivelu behaved very rude in terms of money. Siva in his interview said “No actor in Cinema history has asked money to do that. When he failed to appear for dubbing we asked him directly. He demanded one day of payment for traveling to Malaysia and coming back. Siva also revealed that it is during the movie “Thillalangadi”.

T.Siva discussed many problems caused by Vadivelu during the 24-m Pulikesi shoot. Talking about the Nesamani character becoming viral, Siva said anyone can become viral in this Internet era. “A girl named Priya Prakash Varrier became viral overnight because of a wink. What is her state now?? Do that movie became blockbuster or she being part of any blockbuster movie?? Anyone can become viral nowadays but that will last only for few days” he said. T. Siva is an Indian film producer and distributor in Chennai, India. He has produced 23 films including Saroja and Kanimozhi. He owns the production company, Amma Creations. He is best known for Aravindhan in which he introduced Yuvan Shankar Raja, Saroja and Aravaan.

Vadivelu reported in Behindwoods interview that he is going to feature in Netflix as one of his project and said that he is called by Hollywood production companies. The actor thanked every meme creators for the reach of Nesamani at the end of his interview.