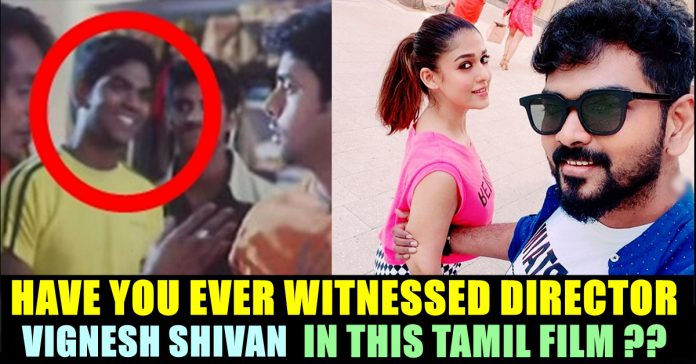 Right from legendary filmmaker Bhagyaraj to epitome of grandeur Shankar, we have seen many filmmakers appearing as junior artist in the films they worked as an assistant director. We even witnessed some of today’s leading actors such as Vijay Sethupathi, Trisha appearing in films as junior artist before getting enough screen space to excel. Now, director Vignesh Shivan who is known for making films like “Naanum Rowdy Dhaan”, “Thaana Serntha Kootam” has joined the list. He appeared in a 2007 released film as one of the protagonist’s friend. The screenshots are doing rounds in the social media platforms now.

Vignesh Shivan debuted to Tamil film industry through Simbu’s “Podaa Podee”. The film’s production started in 2008 and managed to get a theatrical release only during 2012. The filmmaker got the opportunity to direct the film after making a short film by having music director Dharan to compose for it. Before that, Vignesh Shivan had worked as an assistant director in a horror thriller film “Sivi” which was released in the year 2007. Surprisingly, he even made onscreen appearance in the film as protagonist’s friend.

Sivi directed by K.R. Senthilnathan is a remake of Thai thriller film Shutter. The film revolves around a ghost which will be visible only in photographs. Yogi, the grandson of late Thengai Srinivasan, played the lead role in which actresses Jayashree rao and Anuja Iyer played pivotal roles. Music was composed by Dharan who also composed music for Vignesh shivan’s debut film “Podaa Podi”.

Vignesh Shivan credited as assistant director in the title, screenshot of which surfaced in the micro blogging social media site. Check out the screenshot here :

After directing Podaa Podi which is a box office dud, it took 3 years for Vignesh Shivan to release his next film “Naanum Rowdy Dhaan” which kick started his filmmaking career. The film was produced by actor Dhanush and had Vijay Sethupathi and Nayanthara in the lead roles. The filmmaker developed a romantic relationship with Nayanthara during the making of this film.

Vignesh Shivan worked as an assistant director in the movie. Later, he made his directorial debut with the romantic comedy #PodaPodi (2012).

After the success of Naanum Rowdy Dhaan, Vignesh Shivan directed actor Suriya in “Thaana Serntha Kootam”. He also started a production house and named it as “Rowdy Pictures” with which he is producing “Nettri Kann” by having Nayanthara in the lead role. “Aval” fame Miland rau is directing the film.

Have you witnessed Vignesh in this film before ?? Comment below and let us know !!