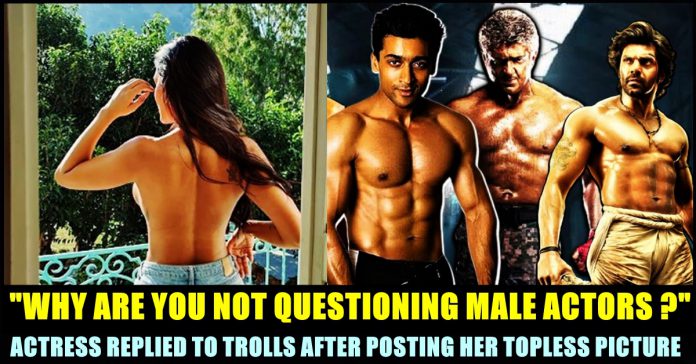 Bollywood actress Esha Gupta who recently made headlines by uploading a series of pictures flaunting her bare back, replied to the negative comments and addressed about the gender bias among the people of the society as far as topless pictures are concerned. The Hindi actress is enjoying 5.6 million followers and has posted 237 posts in her timeline so far. Most recently, the actress went topless and her back was spotted facing the camera while she posed effortlessly for a couple of pictures.

Among the thousands of comments that were surfaced in the actress’s post, many of her followers abused her. They targeted her for her bold pictures. Now, she reacted to such comments while interacting with a news portal.

Esha believed that people are being gender biased on seeing the mean comments that flooded on her topless post. She who asked why male actors are not being questioned when they share a topless picture of themselves, said that always a woman in the industry who receives flak. The actress blamed the mentality of people and expressed her disagreement over women’s clothes being held responsible for promoting rape, according to Times of India.

However, Esha says that she learned ignorance is bliss and added that people will always point finger at her no matter what she is doing as she recalled about the mean comments that surfaced on her different posts. Esha went on to express her wish about the world becoming more progressive and asserted sexism and gender inequality is common all around the world as people dislike women who speak their minds and are upfront.

“They like cutesy girls. But people know that I am strong enough to slap one twice if they slaps me once” the actress concluded. Esha started her career as a model and won Miss India International title in the year 2007. She made her film debut in the year 2012 through a film named Jannat 2. “Humshakals”, “Rustom” and “Baadshaho” are some of her notable films.