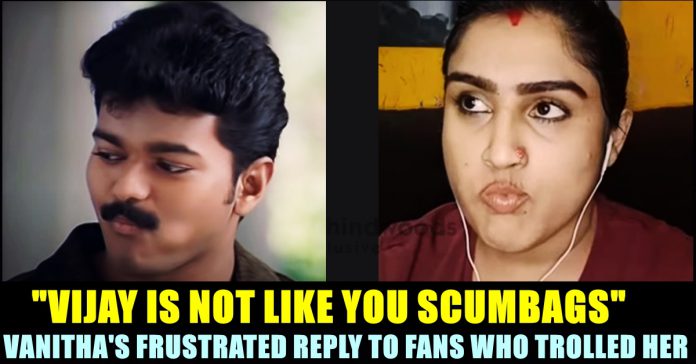 The impact made by the popular video of Vanitha Vijayakumar and Lakshmy ramakrishnan having argument over Vanitha’s recent marriage is reflecting in social media. One of a social media user captured a screenshot of Vanitha’s reaction and compared it to Kushi Vijay which made the actress to blush. However, the reactions of other people for the post made her angry.

When the host of the show tried to make them state their opinions one by one, Vanitha who intervened said that she never agreed for a debate. When Lakshmy said that the host of the show needs to be respected, Vanitha said that she just wants to ask few questions to Lakhmy regarding the earlier interview she gave with Elizabeth. Things turned ugly when Lakshmy asked Vanitha to act with some dignity. Vanitha repeatedly asked Lakshmy who she is to have a say in a problem that took place between herself and Helen.

At one point, Vanitha started abusing Lakshmy’s husband, pointing out how Lakshmy reacted to that earlier interview. She even assassinated Lakshmy Ramakrishnan’s character and called her “Garbage”. Lakshmy said that she didn’t want to involve in an argument with a street fighter. When Lakshmy wanted to disconnect the call, Vanitha said that she will record the video and will upload it to tear her apart.

Replying to Lakshmy who said that Vanitha is changing husband every year, the former Bigg Boss star abused Lakshmy Ramakrishnan in extreme bad words on air. Now, after a week, a social media user compared Vanotha’s one of the reaction with Kushi Vijay.

Number of Vanitha’s own followers started trolling the actress for her reply tweet.

Athukunu…. kanda Sakkada ellam Vijay aaga mudiyuma? He is a one woman’s man not like someone.

@actorvijay is a wonderful human being and a good friend…unlike u losers who judge and mock people and do cyber bullying when u have no say in it …success doesn't come to pathetic scumbags https://t.co/YNuZHPcVgG

Comment your views on this reply of the actress !!