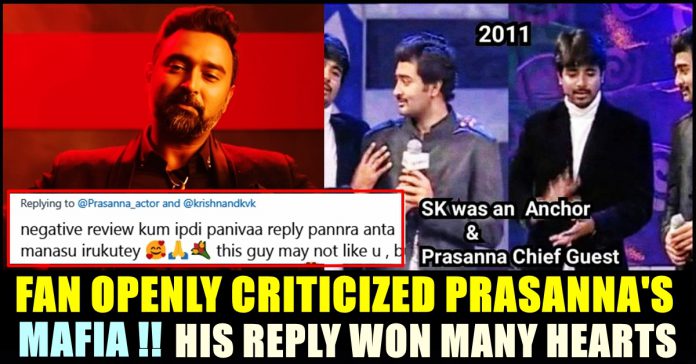 Every fan who watches a movie by spending money from his own pocket is a movie reviewer nowadays. Unlike those who are running a youtube channel to review movies, common viewers are posting their thoughts and opinions about the movie through any of their social media account. In a same way, reviews for the recently released film, Mafia is pouring from all directions of social media platforms. The film was directed by Karthick Naren who impressed audience with his debut film Dhuruvangal Pathinaaru.

Director Karthick Naren who is just one film old, has already won many hearts of the cinema fans as his first film exceeded its expectations. Though he is struggling to release his second film “Naragasooran” due to financial issues, the filmmaker is now busy in giving promotional interviews for his third directorial “Mafia” in which he casted Arun Vijay and Prasanna as protagonist and antagonist respectively.

As mentioned above, his debut film raised the expectation of Tamil cinema audience about his next work, Mafia is getting mixed reviews from those who watched. Actors and technicians of the movie are endorsing the positive statements from the fans about the movie. Actor Prasanna and Arun Vijay are very much active in twitter and responding to the opinions of fans.

Now actor Prasanna’s reply to one of a fan has won many of his followers heart. Most of the celebrities of Tamil cinema would only respond to positive comments about their films. Unlike them, Prasanna has responded to a negative comment of a user which is receiving positive response in the micro blogging social media site. The user said that Mafia is not good by mentioning the official twitter account of Prasanna.

Any film will likes n dislikes. I take ur dislike too with a bow😍🙏

This comment from Prasanna received as many as 1000 likes and lot of positive comments. Check out some of them below :

You are awesome actor.. don’t worry in life up and down is normal but this Ur time to rise..

negative review kum ipdi panivaa reply pannra anta manasu irukutey 🥰🙏💐 this guy may not like u , but we guys like u ever dear prasanna bro 😍

It is notable that Prasanna replied in a similar way for a controversy which compared the growth of himself and actor Sivakarthikeyan. Check out the screenshot below :