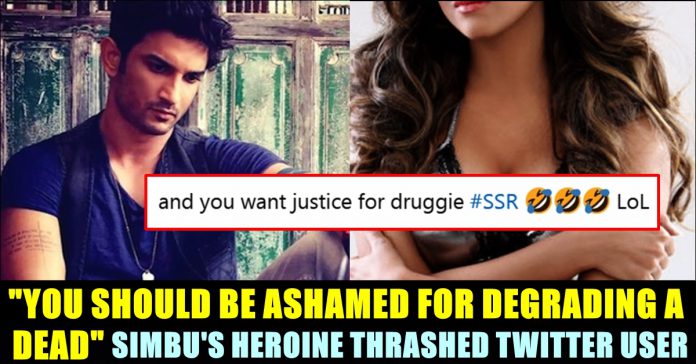 Demise of Bollywood actor Sushant Singh Rajput divided the users social media platforms into two. With a set of people seeking justice for the death of the young actor by accusing the Big names of Bollywood, Social media sees a large number of people asking others to concentrate on current issues instead of sticking to an actor’s death. Things turned extremely controversial when Bollywood actress Kangana Ranaut accused the entire industry of using excess amount of illegal drugs in their daily life, in the process of getting justice for Sushant’s death.

Sushant Singh Rajput was died on 14th of July 2020 and it is widely believed that he was died of suicide. After several investigations from the Police officers, the case was transferred to CBI by Supreme court. On 19th of August, Supreme court ordered a CBI probe in the Sushant Singh Rajput’s death case. Kangana Ranaut who earlier stated that the existence of “Nepotism” killed Sushant, came up with a shocking statement saying that Sushant was killed because he knew some dirty secrets of Bollywood including the vast usage of drugs in the film industry.

Recently Rhea Chakraborty, girlfriend of Sushant got arrested for procuring drugs for her boyfriend Sushant. Narcotics Control Bureau arrested actress Rhea Chakraborty and sent her 14 days of judicial custody. Rhea has been charged under the Narcotic Drugs and Psychotropic Substances Act for her alleged role in the drugs angle that has emerged during investigation into the June 14 death of actor Sushant Singh Rajput.

Though there was no direct contact between Rhea and the drug peddlers, Rhea instructed two individuals to procure the drugs for the consumption of Sushant Singh Rajput. It is not clear how much quantity of Marijuana has been handled by the three individuals but they procured the drug in several occasions. Rhea Chakraborty was reportedly aiding Sushant Singh Rajput’s drug usage and financially supported it.

Meanwhile, actress Nila aka Meera Chopra who is known among Tamil audience for acting in SJ Suriya’s “Anbe Aaruyire”, Simbu’s “Kaalai”, posted a tweet saying that most of the Bollywood actors are fitness fanatics. She said they couldn’t consume alcohol while maintaining a good physique and doubted how they could have involved in drug consumption.

Ive seen maximum number of fitness fanatics in bollywood. Constant pressure of looking fit and fresh on screen is not easy, forget abt drugs, even alchohol becomes a deterrent in that lifestyle. Terming it as a drug influenced industry is just obnoxious.

For this tweet, a follower disagreed with her and said “DRUG is a huge part of staying skinny in the entertainment industry.” He advised the actress to educate herself. And surprisingly he added the hashtag “JusticeForSSR”

secondly just to fact inform you, drugs are the main cause of these "fitness fanatic" routine. DRUG is a huge part of staying skinny in the entertainment industry. educate yourself on the matter & ur Jayati is mentally unfit & in recent yrs its coming out more. #JusticeForSSR

On seeing the contradiction in his tweet and hashtag, another follower posted a tweet writing “and you want justice for druggie #SSR LoL”

and you want justice for druggie #SSR 🤣🤣🤣 LoL

Meera Chopra, saw the tweet of the user and got extremely frustrated. “U should be ashamed of yourself for calling somebody who is dead by those names. And there is nothing ‘lol’ about it.” her reply tweet read.

And how do u know he was a druggie?? U should be ashamed of urself for calling somebody who is dead by those names. And there is nothing ‘lol’ about it. https://t.co/d59ZpF72vt

Earlier, actress Taapsee Pannu, while supporting Rhea Chakraborty, said that Sushant would have arrested if he was alive for consuming illegal drug.

Correction. She wasn’t consuming. Financing and procuring for Sushant. So in that case if he was alive he would’ve been put behind bars too ? Oh no. She must’ve forced the drugs onto him. Sushant must’ve been force fed marijuana. Yes that’s what it is exactly. We did it guys 🙌🏼 https://t.co/6f8l7DncuI