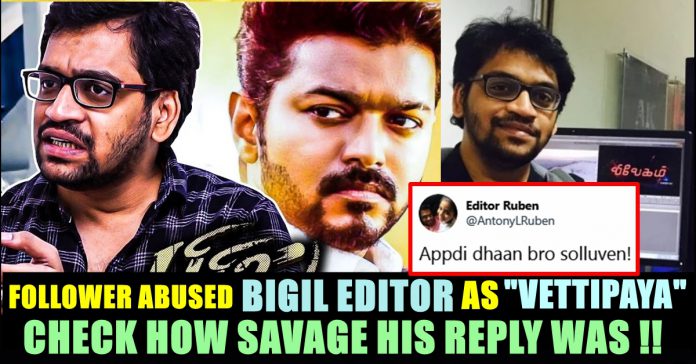 Editor Antony Ruben is one of the busiest editors of Kollywood industry. He worked in many of the recent films and Viswasam, Aramm, Kanaa, Irumbu Thirai are some of the significant movies he worked on. The editor is very much active in micro blogging social media platform, Twitter and was seen interacting with his followers in few occasions.

Ruben who is in limelight now as he edited the most awaited film of the year, Bigil, is also editing Sivakarthikeyan’s upcoming science fiction film “Hero”. Yesterday, he shared the second look of Sivakarthikeyan’s “Hero” and wrote “Glory to God😇❤️🙏🏻 Here is the #Hero second look!” in the caption.

Ruben is often seen using the phrase “Glory to god” for his Twitter posts. Be it a film promotional post or a common post, he added “Glory to god” as the caption. Check out few of his such posts :

Special thanks to my team Kalai, Dinesh, Darling & Bhuvan for the 24/7 support! This wouldn’t have been possible without you guys! Love my assistants ❤️ pic.twitter.com/s6H6JUAzUE

Glory to God😇❤️🙏🏻
Happy to be associated with this gem of a film #KD as a Trailer/Promo editor! Thank you @memadhumita for trusting me😇🙏🏻 https://t.co/XH09A5qgGE

To his recent post, one of a fan tried to troll the editor for using it often. He even abused the high profile editor in his reply. “if glory to god, then why you are doing the editing, ask your useless god to edit… வெட்டி பயலே 😂😂😂😂” the user wrote in his tweet.

if glory to god, then why you are doing the editing, ask your useless god to edit… வெட்டி பயலே 😂😂😂😂

To this tweet, Ruben said that he will say it again and again for 1000 more times. He even gave the online user a perfect reply for calling him as “Jobless guy”. “Appdi dhaan bro solluven! 1000 murai solluven! Glory to God😇❤️🙏🏻 Appram FYI, naan vetti paya dhan! Neraya padangala vettuna Vetti paya dhaan🤣🤣🤣🤣” read the reply of Ruben.

After graduating with a degree in Visual Communication from Loyola College Chennai .Ruben approached director Gautham Menon to become an assistant, who redirected him towards noted film editor, Anthony, to join as assistant editor. After assisting him for few years, Ruben became one of the prominent editors of the industry with his hard work.

What do you think on this reply of Ruben ??Comment your views !!