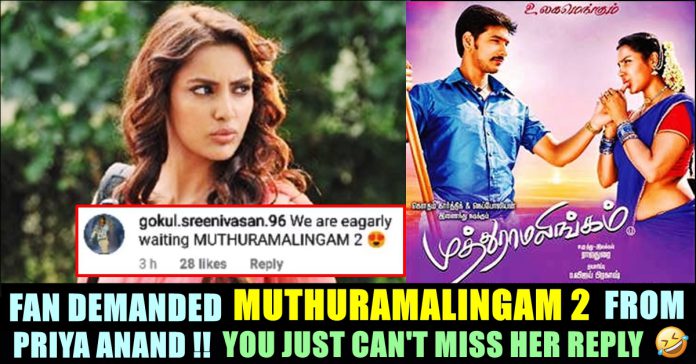 “Muthuramalingam” is a rural drama directed by Rajadurai. The film featured Gautham Karthik and Priya Anand in the leading roles, while Napoleon playing a pivotal supporting role. During its release time, the film received negative reviews from the critics and failed to perform at the Box office as well. The film also became a subject to severe online troll with netizens making several video and photo memes to make fun of the film.

Now, after four years, Priya Anand who is engaging her million number of followers by uploading pictures from her photoshoots, recently received a strange demand from one of her followers. The fan whose user4 name read as “Gokul Sreenivasan” wanted the actress to feature in the sequel of “Muthuramakingam”.

He said “We are eagerly waiting Muthuramalingam 2” through his comment to which the actress replied “Me Too !!”. Followed by that Priya also shared a meme in her story which showed a scene from Vadivelu’s “23m Pulikesi”. In the video, we could see Vadivelu who played a king could be seen regretting for committing a blunder.

Priya Anand shared the video and indirectly denoted that she regrets for doing the film in a most hilarious way. Watch the videos shared by Priya Anand in her Instagram story below :

On the work front, the actress who was last seen in the remake of Telugu blockbuster “Arjun Reddy”, is expected to be seen in “Mirchi” Shiva’s “Sumo, a Kannada film named “James”, “RDX” and in “Anthagan”, remake of Hindi blockbuster “Andhadhun”.