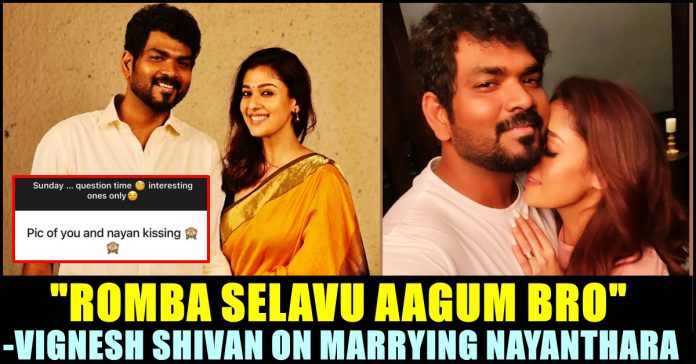 Director and Lyricist Vignesh Shivan conducted a chat session with his Instagram followers and the most of the questions that were asked were related to actress Nayanthara who is fondly called as “Lady Super Star” by her fans. The filmaker patiently replied to many questions and also answered question on when his marriage with Nayanthara is going to take place. He even answered to questions of a fan who asked him to send a “secret” picture of himself and Nayanthara and to the one who asked him to send the picture of himself “kissing” Nayanthara.

Vignesh Shivan debuted to Tamil film industry through Simbu’s “Podaa Podee”. The filmmaker developed a romantic relationship with Nayanthara during the making of his second film “Naanum Rowdy Dhaan”. After the success of Naanum Rowdy Dhaan, Vignesh Shivan directed actor Suriya in “Thaana Serntha Kootam”. He also started a production house with Nayanthara and named it as “Rowdy Pictures” with which he is producing “Nettri Kann” by having Nayanthara in the lead role. Some other films such as “Rocky”, “Koozhangal” are also going to get released under the banner.

The “NRD” maker and the lead lady of the film are in relationship for more than 5 years and fans, media never missed to question them about their marriage whenever the duo appears together in public events or in Wikki’s Instagram posts where he often uploads the picture of himself and the seasoned actress. Now, through his chat session, the filmmaker opened on the real reason behind the delay of their marriage.

“Why not getting married to Nayan mam.. Eagerly waiting” a fan said through his message to which Wikki answered by saying “Romba Selavu Aagum Bro, Marriage and all.. So saving money for marriage and waiting for Corona to go way”

Check out the screen shot of his reply :

When someone asked him to send the picture of himself kissing Nayanthara, the filmmaker cheekily said that he will be busy at that time and need some one else to click the picture. “I will be busy 🙁 only someone else has to click during that time” Vignesh Shivan’s reply read.

Check out some of the other screen shots of Wikki answering to the questions related to Nayanthara :

On the work front, Vignesh Shivan and Nayanthara have joined hands for their second project “Kaathu Vaakula Rendu kaathal” in which Vijay Sethupathi and Samantha were selected as other two lead characters. Nayanthara is expected to appear in half a dozen films post lock down which includes Rajinikanth’s “Annaththe”, Thriller “Netri Kann” etc. Recently, a buzz on Nayanthara entering Bollywood to pair up with Shah Rukh Khan surfaced and the actress is also going to star in “Premam” fame Alphonse Puthre’s next film “Paatu” with Fahad faazil.