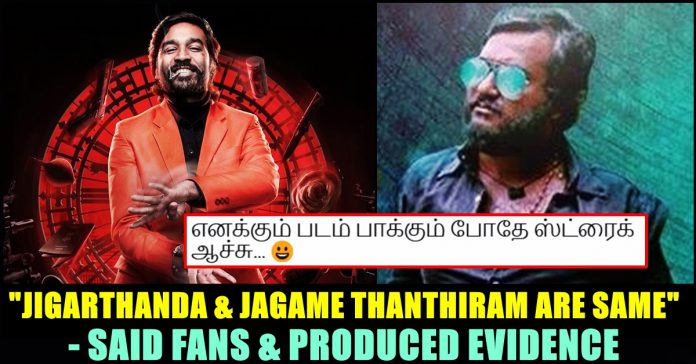 Fans comparing movies that contains similar plots in social media platforms is common in this digital era. But trying to prove that a filmmaker has remade his own movie with different casts is something that sounds bizarre, ain’t it ? Users of Twitter made a comparison between Karthick Subbaraj’s recently released “Jagame Thanthiram” and his widely recognised film “Jigarthanda” which no one saw coming.

As soon as getting released in the online streaming platform “Netflix India”, “Jagame Thanthiram” started getting mixed reviews from fans. The film had huge expectations and got postponed several times due to the COVID 19 virus. The film was supposed to be made prior “Petta” and the filmmaker, after receiving nod from Sashi and Dhanush, completed the Rajinikanth starrer and came back to this project. Karthick Subbaraj said that he tried to cast Al Pacino or Robert De Niro in one of the main roles of the film but failed to meet their budget.

However, after getting released, the film became a subject to severe online troll with few people saying that it satisfied them. Many expressed their disappointment over Karthick Subbaraj, saying that it is easily his worst movie in his filmography. The young filmmaker who is known for his intriguing screen play, seemingly failed to engaged the audience with this action drama. The film also received average review from the critics. The film’s plot revolves around a rural gangster who is getting hired by a overseas crime lord to take down a rival of him.

Now, to our surprise, a tweet thread surfaced in Twitter comparing Jagame Thanthiram and Jigarthanda, a 2014 released gangster drama. Through the series of tweets, the user compared Joji with Bobby Simha and Siddharth with Dhanush.

Further, the comparison went on to conclude that the protagonist who is being controlled by the gangster, betrays him in the climax in both the films.

Check out some of the reactions in twitter for the comparison :

Recently, Sashi kanth of Y not studios who produced “Jagame Thanthiram”, came up with a post in his social media handles talking about success, victory, failure and defeat and it is highly believed by fans that the post has something to do with the result of the recently released product of him. In his twitter and Instagram handle, the producer wrote “Success is not Victory, Failure is not DEFEAT. KEEP MOVING :)” as his post’s caption. Check out his post below :

Success is not Victory
Failure is not DEFEAT