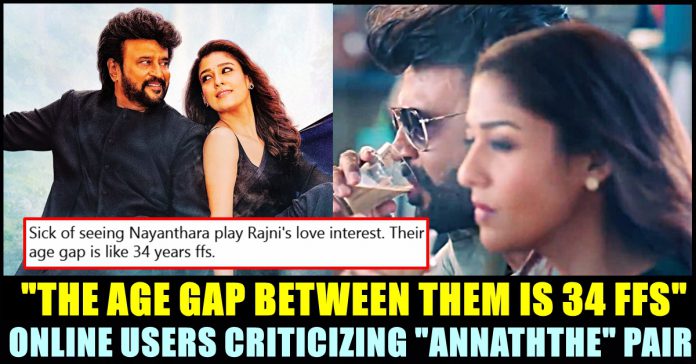 Promotional posters revealing Nayanthara and Rajinikanth as pair in the upcoming “Annaththe” film released by Sun Pictures while announcing about the release of the second single “Saara Katrae” are receiving various kind of reactions from online fans. Among the many who expressed their admiration over Super star Rajinikanth looking young, even at the age of 70, few criticized himself pairing up with Nayanthara. With a set of fans expressing their displeasure over Nayanthara and Rajinikanth pairing with each other repeatedly, a number fans also criticized the age difference between the duo.

Sun Pictures has been releasing posters to promote the upcoming song in full swing. Announcing about the song which was sung by Sid Sriram and Shreya Goshal, the production house wrote “SaaraKaattrae – The second single from #Annaatthe sung by @sidsriram & @shreyaghoshal is releasing [email protected] 6PM” on Friday by releasing a brand new poster.

Check out the other posters released by the production house below :

On seeing these posters, apart from those who admired Rajinikanth looking dapper even at the age of 70, a number of fans who were thinking that Rajinikanth is going to pair with Meena or Khushbu, uploaded tweets and posts in social media platforms, expressing their disappointment. Rajinikanth and Nayanthara shared screen space in films such as Chandramukhi, Kuselan, Sivaji, Darbar so far and has been confirmed as pair in “Annaththe” as well.

On realizing the fact of the particular pair getting repeated back to back, many posted tweets opining themselves. Meanwhile, many of the online users also criticized the age gap between the duo. “The fact that the whole Kollywood crowd made fun of Venkatesh for starring opposite Ammu Abhirami in a flashback” a fan said to criticize 70 year old Rajinikanth pairing up with 36 year old Nayanthara.

The fact that the whole Kollywood crowd made fun of Venkatesh for starring opposite Ammu Abhirami in a flashback 👏👏👏👏 https://t.co/wVhnJWkMp0

It's odd to see rajini in this age having romance song with nayanthara
Rajini should avoid this kind of songs https://t.co/9jObkzUEv2

This is disgusting to say the least. https://t.co/H5z3WdqXBr

So again Nayanthara plays Rajini’s pair in Annathe. 🙄 Why not Meena ??? Think out of the box!

I see some tweets complaining about the age difference between Rajinikanth and Nayanthara. Well, welcome to Indian Cinema😏😌 https://t.co/VAPZQpMtLA