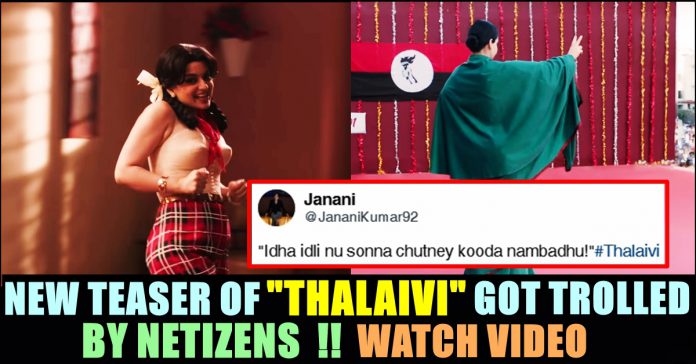 The first look and teaser of Kangana Ranaut starrer “Thalaivi” revealed today only to disappoint the fans. Being made as a biographical picture of Thalaivi J. Jayalalitha, it was directed by “Madharasapattinam” fame A.L Vijay. The one and half minute teaser showed the younger and older version of late chief minister J.Jayalalitha.

Starting with Kangana Ranaut performing for a song in the 1965 movie “Vennira Aadai” in which actress Jayalalitha debuted, the teaser ends with Kangana standing in front of a large number people as a political party leader. What left the fans in dejection is the way the older version of Jayalalitha was shown in the teaser.

It looked more like an animation character and many of the twitter users who saw the teaser couldn’t feel Kangana or Jayalalitha. They started making fun of both teaser and first look as it does not compete with the reality as far as the looks of the lead is concerned.

Check out some of the reactions from twitter for this first look :

#KanganaRanaut as young Jayalalitha is still ok…But the older one as politician is bad !

Vidya or Keerthy Suresh would have been perfect.#Thalaivi

Me after seeing #Thalaivi first look and teaser… pic.twitter.com/ceJ0lykGmj

Sorry to say but this doesn’t look good at all.

AL Vijay seems to have downloaded the wrong Thalaivi pic.twitter.com/y0WcywFeny

When are the protests in Marina happening? I’m ready. Irrespective of our political ideologies, we should unite as a state and ban this ..this..this.. thing. Because if we allow this now, Akshay Kumar could play Karunanidhi in his biopic next. pic.twitter.com/FL4BLACxVn

Directed by A.L Vijay, Thalaivi is slated to hit screens on June 26, 2020. The film also stars actor Arvind Swamy in the role of M.G. Ramachandran. What do you think on these reactions received by Thalaivi teaser ?? Comment your views below !!