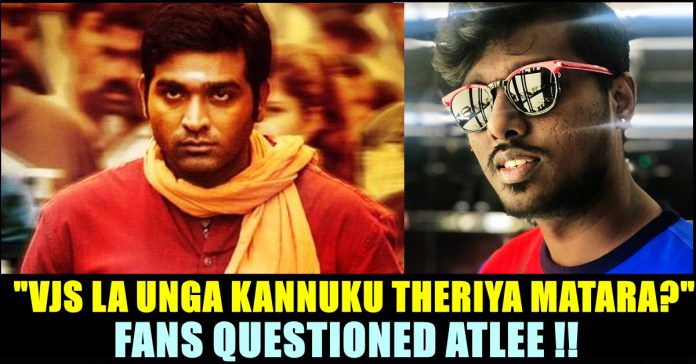 For a change, director Atlee is being questioned by the fans for a latest tweet he posted instead of being questioned for plagiarising. The filmmaker who worked with Nayanthara and Samantha in two films each wished their next film “Kaathu Vaakula Rendu Kaadhal” a best wishes on the day of the film’s motion poster released. The film is going to be directed by Vignesh Shivan who is a best friend of Atlee. As soon as the announcement surfaced, along with the fans, many celebrities wished the team for the best.

However, fans who saw Atlee missing the name of the protagonist in his tweet started questioning about it in the comment section. Vignesh Shivan who reunites with Vijay Sethupathi and Nayanthara after the success of Naanum Rowdy Dhaan, is going to have Anirudh as music composer. The film is going to be produced by Lalit Kumar of Seven screen studios with Vignesh Shivan’s Rowdy Pictures.

Atlee might have no introduction with Vijay Sethupathi which made him to forget to add his name in the tweet. However followers of the filmmaker felt that he shouldn’t ignore the protagonist of a movie while wishing for it. “Your eyes won’t see the hero of this movie?” asked one of his follower.

After directing 4 films in Tamil, Atlee became one of the leading filmmaker of Kollywood. Many news regarding his next venture has been surfacing. Some news portals said that he is going to direct Bollywood Badshah Shah Rukh Khan, others said that he is going to make a film with Telugu Superstar Junior NTR. Atlee also gave hint to the fans of actor Vijay about a prequel of “Bigil” by having “Rayappan” as the main lead. However neither of them made it to the official announcement yet.

Vijay Sethupathi is currently working on actor Vijay’s Master as antagonist. He who has a handful of films to be released is considered as one of the very few actors who tends to show variations in the roles he do. What do you think on Atlee missing Vijay Sethupathi’s name and the reactions of fans to it ?? Comment your views below !!