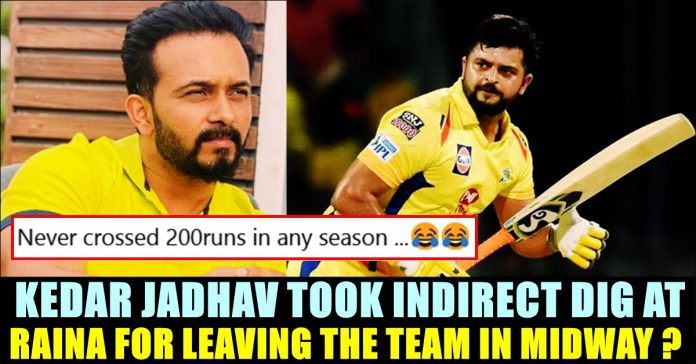 Kedhar Jadhav who is currently playing for Chennai Suresh Kings in IPL tournament, recently uploaded a video in his official twitter account which triggered the fans of Suresh Raina and other cricket watching fans. The fan who commented on his post highly believed that Jadhav is taking an idirect dig at the left handed batsman who left Dubai to look after his family. The video was uploaded on 29th of August which is two days before Raina updated about the issues he is facing through a couple of tweets. However, as a teammate, Jadhav would have already known about Raina’s personal issues is what fans believe.

“On the path of excellence – you find 1000 excuses to let go, but only 1 reason to hold on. The choice is YOURS !” his caption read.

On the path of excellence – you find 1000 excuses to let go, but only 1 reason to hold on.

The choice is YOURS ! pic.twitter.com/PLx4iyem0A

Kedar Jadhav came into Indian team replacing Suresh Raina in his middle order spot. Since his entry, Raina found it hard to make it to the International side. Now, as Raina left the team citing “personal reasons”, Jadhav’s post triggered the fans of the “Chinna Thala”

Lol🤣🤣🤣
You r trying to take place of raina.
Pls wakeup and see the reality of yours
U can't play matches continously without injuries

I still can't digest how could you make it to indian middle order in tournaments like CT 2017 or WC 2019. It's beyond my comprehension that a country of batsman had to stick with you in such big tournaments & had to pay the price for it. Your innings against ENG in WC sums up.

If this is against Raina..than do remember Bhai God is watching

You score a pack of 400 runs like Mr. IPL this season, you will justify that 1 reason of yours @JadhavKedar

If this to Target @ImRaina, remember he is Mr. IPL csk is what it is bcz of him. Team management should hv taken better care of him. Instead of supporting yr team mate pleasing management? Very typical, pity you

Several speculations kept surfacing about Raina’s exit from Chennai Super Kings team. N Srinivasan’s “Prima Donna” statements on the left hander also left the fans of CSK dejected. On 1st of September, Raina came up with a couple of tweets explaining about his tragic family state.

Till date we don’t know what exactly had happened that night & who did this. I request @PunjabPoliceInd to look into this matter. We at least deserve to know who did this heinous act to them. Those criminals should not be spared to commit more crimes. @capt_amarinder @CMOPb