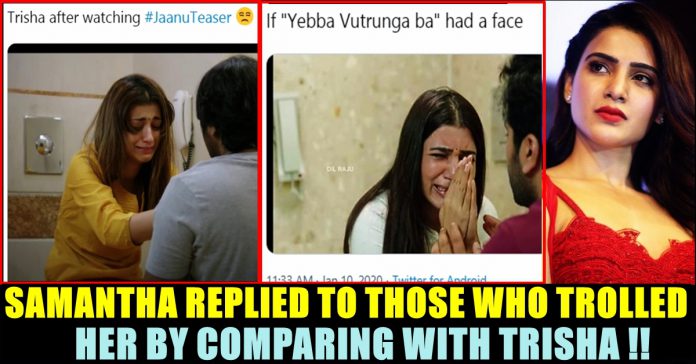 Every actress would love to be essayed in a film, in the way Trisha was portrayed in her latest film “96” in which she paired opposite to Vijay Sethupathi as his love interest. 96 is a very special film and it’s also the first time that Trisha is sharing the screen space with Vijay Sethupathi. In an interview with Indian Express, the actress revealed that one of the only reasons that she signed the film was because she wanted to work with Vijay. She said, “I was quite intrigued by the script when I heard it the first time. The other factor that really drew me to this film was the opportunity to work with Vijay.

Now the teaser of its remake “Jaanu” has been released in youtube. The teaser shows Samantha and Sharwanand replacing the roles of Samantha and Vijay Sethupathi. The video gives us a sneak peek into the world of childhood sweethearts who grow apart over time. However, years later, they meet again at a school reunion. To our surprise, this film is also directed by C.Premam Kumar who made the original.

Jessie & Jaanu.. Samantha failed in both.. One & Only @trishtrashers ❤ #TrishaForLife

In a way of replying to all the trolls, Samantha responded to a tweet of one of a follower. The actress said that she didn’t try to copy Trisha as her performance was most perfect. In her tweet she said “I felt it was important to not try and copy the most perfect performance @trishtrashers 🥰 .. wouldn’t work .. #Jaanu is not made for comparison only to share an experience that more people deserve to feel 🙏”

Thankyou so much Avad… yes I felt it was important to not try and copy the most perfect performance @trishtrashers 🥰 .. wouldn’t work .. #Jaanu is not made for comparison only to share an experience that more people deserve to feel 🙏 https://t.co/YUUPOQiEq2

What do you think on the performance of Samantha in Jaanu teaser ?? Comment your views below !!