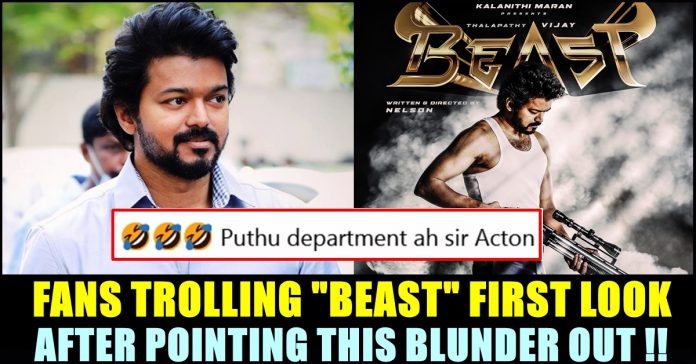 The most awaited first look of “Thalapathy” Vijay’s first look released on Internet and left fans of the actor go gaga. The film which was tentatively titled as “Thalapathy 65” since the announcement, is going to be called as “BEAST” from now on. The title and first look was released in the official twitter account of actor Vijay and received 100k likes in no time. It became the first tweet to get fastest 100k likes in less than 15 minutes in India.

The poster shows Vijay flaunting his biceps by holding a shot gun effortlessly. The gun is mounted with a telescopic sight and the poster left fans to wonder whether Vijay plays a police officer or a hit man. As soon the title got released on Internet, it managed to occupy the top spots of the Twitter trending. Many celebrities from film industry joined the fans in expressing their joy over the first look.

A recent buzz surfaced saying that Director Selvaraghavan is going to play the antagonist role and it is very well known that Pooja Hegde is playing the female lead in the film. Music of the film is going to be composed by Aniruth Ravichander. While millions of fans and celebrities lauding the unexpected first look poster of the Vijay’s upcoming film, fans pointed out a blunder in the poster and are making fun of it.

In the poster, while mentioning “Anbariv” master in action department, makers of “Beast” wrote “ACTON” in the post which grabbed the attention of netizens. They pointed out the blunder and started making fun of the “Beast” team. “Tiny spelling mistake – ACTON instead of ACTION . Do fix it team” movie reviewer Prashanth said in his tweet whereas a fan said “bro, action ku pathila Acton poteenga avlo avasaramaa”

Tiny spelling mistake – ACTON instead of ACTION . Do fix it team #Beast pic.twitter.com/oBZ7W4Fum4

Early reports about the film said that Vijay is playing an International con artist in the film. The film is expected to hit the screens on Diwali post lockdown. The film crew went to Georgia to complete the first schedule of the film and the shoot got intervened due to the second wave of COVID 19 virus. Now, ahead of actor Vijay’s birthday and on the day director Nelson Dilipkumar’s birthday, the crew has released the poster.