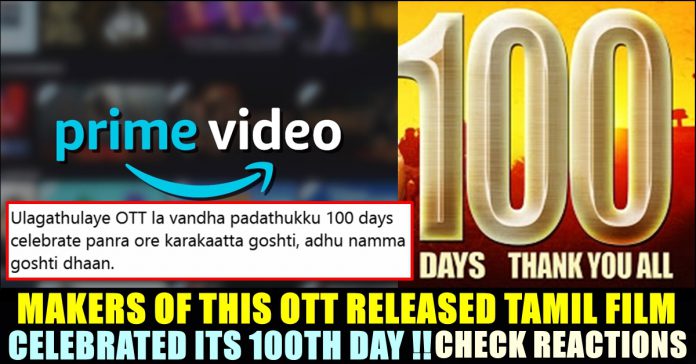 Produced by Suriya under his 2D entertainment, the film “Ponmagal Vanthaal” contained ensemble cast including Parthiban, Bhagyaraj and Prathap Pothen along with the lead actress Jyothika. It was released on 29th of May month in Amazon Prime and garnered mixed reviews from the fans and critics.

The film is based on a resident in Ooty named ‘Petition’ Pethuraj reopening a case from 2004 that involved a serial killer named ‘Psycho Jyoti’ who was convicted for the kidnapping and murder of multiple children. Venba (Played by Jyothika), Pethuraj’s daughter and an amateur lawyer, seeks to revive the case amidst oppositions. The story revolves around why Venba chose the case and on the actual truth behind the crime.

The film released after several controversies and confrontations from the owners of Tamil nadu theatres. Reports suggested that the film which was made of Rs. 5 crore budget was bought by Amazon for Rs. 9 crores. Now, one the 100 the day since the release of the film, the makers have made a publicity design and released it to celebrate the special event.

“It’s been 100 days since we introduced you to our angel & the love just keeps growing! Thank you for making #PonmagalVandhal a huge success!” read the caption of their post.

On seeing this post, many fans who watched the film, started trolling it for celebrating the event as if it got released in theatres. “It seems, you guys would celebrate 1000th day” said one of a twitter user whereas another one said that he is expecting 150th day poster.

Suriya has also decided to release his upcoming film “Soorarai Pottru” in Amazon Prime. The film is going to be released in the online platform from 30th of October. Comment your views on these reactions for the 100 days posted of “Ponmagal Vanthal” !!