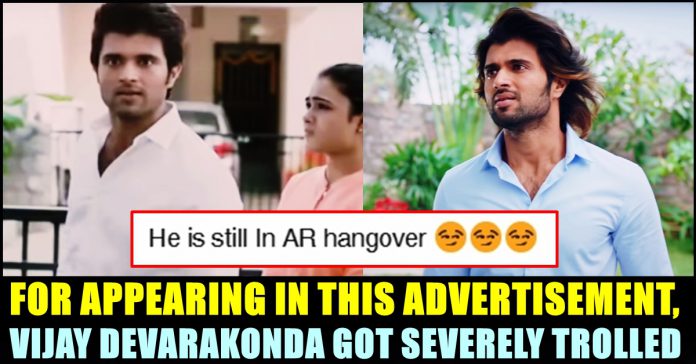 A new advertisement of Vijay Devarakonda in Arjun Reddy pattern has created ruckus among the fans and haters of the actor. The advertisement which is about a matrimonial website has the actor in his Arjun Reddy get up. He was seen recreating an important scene from his blockbuster film in which he paired opposite to Shalini Pandey.

The actor who becomes a subject of criticism in whatever he does, received few harsh criticisms for this advertisement as well. In the ad, after recreating the scene of Arjun Reddy, Vijay Devarakonda says that it will feel good only while performing it for a film. “When it comes to reality, we can’t really be happy by doing a marriage without our parents consent.” the actor would say to promote the M4marry.com website.

This advertisement gained him both appreciations and criticisms. Few fans felt that the actor who is portraying the characters of lover boy since Arjun Reddy, started doing the same in advertisements as well. (Vijay Devarakonda Facing The Wrath Of Social Media For His Role In World Famous Lover)

What he is doing also same routine. Same mannerisms, same modulation in every movie.

He is still In AR hangover 😏😏😏

Director: so the protagonist in this story has some anger issues and….

However, the fans of the actor came in defense and posted positive comments about Vijay’s acting in the advertisement. Check out their comments below :

What's the problem with these haters who are scrutinising his acting even in the ads. This is what happens when you break the system and reaches top without any support. Everyone starts questioning you, how come does he reached this height ! Lol !#VijayDeverakonda

How it is waste of talent??..he is getting money by doing like this……..the same thing he did in movies,he got money…………..try to see it in a positive way…..

People who hate him must be jealous of him.. nothing else.. he can't be ignored 😉😉 pic.twitter.com/ZoBLYGEgvQ

Vijay Devarakonda is an South Indian actor who rose to fame through a Telugu film named as “Arjun Reddy”. The film became a blockbuster not only in Andhra but the people of Tamilnadu and Kerala also celebrated the movie and it impressed the youths in big time. After the huge hit of Arjun Reddy, Vijay made his tamil debut through Nota and is expected to appear in World Famous Lover which is a bilingual.

What do you think on these comments received by the actor ?? Let us know your views !!