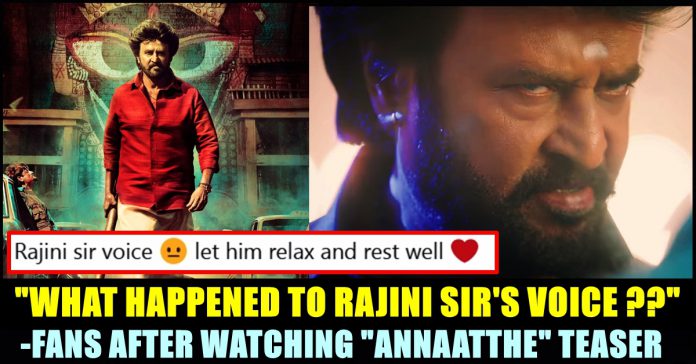 The most awaited teaser of “Annaththe” starring Rajinikanth and Nayanthara released on 14th of October with much expectations of fans. The film which is scheduled to release as Diwali special, is believed to bring back the audience to theatres post COVID 19 restrictions. It is also a special film for Super star Rajinikanth whose last film “Darbar” didn’t satisfy his fans much. “Annaththe” is going to be the first film of Rajinikanth after the final decision he made about his political entry. Now, after the release of the teaser, many fans expressed their concern over Super star Rajinikanth’s voice and few wants him to rest for a bit before signing his next movie.

Rajinikanth played the role of a villager in “Annaththe” which is evident through the dialogue he utters in the 94 seconds long teaser. He seems to be on a mission to make urban folks realize the tenacity and strength of a village man. “So far you had only seen the good side of a villager. You didn’t see how his wrath would be, eh ?? He is like a wild river which don’t have ends and stops” Rajinikanth says in the teaser to warn his enemies.

Watch the teaser below :

Siva promised to bring back the vintage Rajinikanth through the teaser and many fans of the star, including Dhanush, Sivakarthikeyan expressed their awe over the sole show of the Superstar actor. “Vaa saami !! Vaa thalaiva!! Kaattaaru !!” Dhanush said in his tweet whereas Sivakarthikeyan said that the teaser gives him “Padayappa” vibes.

Thalaivaa 🔥🔥🔥🔥🔥Just can’t wait for the FDFS !! #Annaththe is gonna set the screens on fire for this Deepavali 😎 https://t.co/GbsE8Jh7ch

Meanwhile, a number of fans felt that the voice of the Superstar actor is different from his previous films. Many expressed their concern over the 71 year old actor and wanted him to take some rest before signing his next movie. “Rajini Voice than Epayume Avaroda Strength aana athuve ipo minus ah iruku” a fan said in his tweet whereas another one wrote “Rajini sir voice, let him relax and rest well”

Me – after finding out the voice in the teaser was from Rajini 💔 pic.twitter.com/0vbTZfzfTp

It is Viswaasam Part 2 type. Honestly, @rajinikanth lost his voice.

What happened to Rajini's voice??? The usual power is missing…

Comment your views on “Annaththe” teaser and the reactions on Rajinikanth’s voice !!