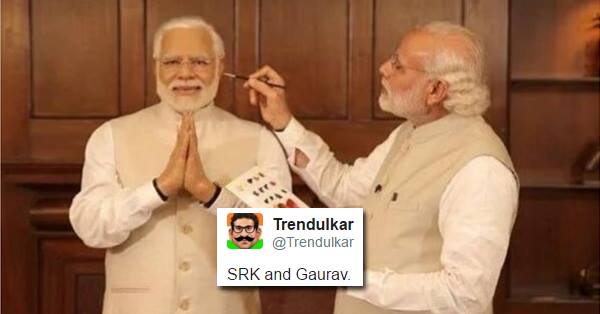 The social media presence of Narendra Modi is simply phenomenal. Finally, his wax statue in Madame Tussauds is unveiled and is installed in Bangkok, Hong Kong and Singapore. True to the selfie addict image of his, the PM is involved in the entire process, right from the start. He has the capability of generating humungous public interest.
As the PM, he was busy thanking the team of Madame Tussauds and the same time, Twitter users took this opportunity of bringing in some fun. Have a look at these reactions! They are just hilarious!

Modiji did something which UPA couldn’t !

Modi Ji has once again done what UPA couldn’t. He has brought Modi Ji back to India. pic.twitter.com/NO6vErEKRD

“Now that they’re two of us, you can stay home while I go tour the world and no one will know the difference!” pic.twitter.com/Zrh62zmPft

When Modi is busy hiding his wrinkles, because No Marks doesn’t work on wax. pic.twitter.com/PP28Zo7m2Y

When it didn’t turn out well!

When Modi’s 13 going on 30 experiment didn’t turn out as well as he’d hoped. pic.twitter.com/StwhVDHwng

When photoshop license on your laptop expires but you still gotta do it. pic.twitter.com/lCh8DZkmf7

When Modi finally decided to have a look at the lost and found box at Kumb ka Mela. pic.twitter.com/9g7Z0mPnpI