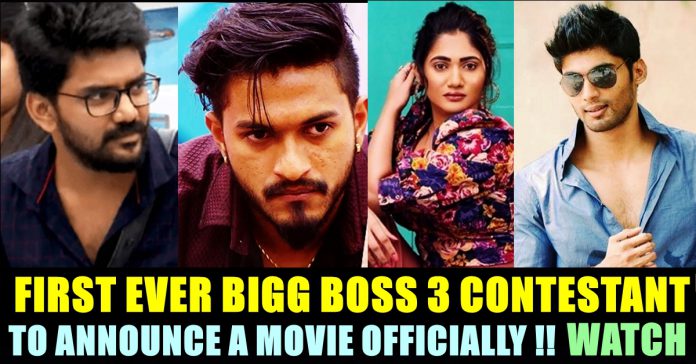 All the three season of Bigg Boss Tamil show brought the participants of it in limelight. The show which was hosted by Ulaganayagan Kamal Haasan is one of the highest viewed program as it attracted the family audience in big time. The first season of Bigg Boss show was won by model Aarav and the second season of the reality game show was won by actress Ryithvika whereas the third season’s title was grabbed by Malaysian model Mugen Rao.

As we all know, every contestant of Bigg Boss show are participating in the show not only for money but also for an exposure in the Cinema industry. In the third season of the show, many promising youngsters participated in the show who are expected by the audience to make a big entry in the Kollywood film industry. However, no contestant made an announcement about their upcoming project in the film industry including Kavin who already acted in a movie as protagonist.

Mugen Rao who won the title was seen participating in the game shows of the channel itself whereas Losliya became very much busy in conducting photoshoots for her Instagram timeline. Sakshi Agarwal, Abhirami Venkatachalam didn’t make any announcement as well. Now to our surprise, Tharshan who was considered as a talent by Kamal Haasan, became the first contestant to make an announcement about his debut film.

Through his official Instagram account, in which he enjoys more than 8 lakh followers, Tharshan announced that he is going to make his debut with a grand crew. The Srilanka based model thanked his fans for pouring unconditional love for him and said that it is an unforgettable day in his life.

“I can’t forget this day in my life. Today I signed my first movie. I have heard many stories all these days, This story and my character in it is very close to my heart. I hope you all will like it. I am happy to work with such a grand crew in my very first movie. I couldn’t reveal any details right now as the first look of my film is going to be released soon. You will know the details through that. And the main reason behind me posting this video is to thank you guys. Thanks for pouring the unconditional love without expecting anything” said Tharshan in the video.

My life has been blessed. Thank you so much so much guys❤️. Love you all

Let us wish together for Tharshan to have successful film career ahead !!