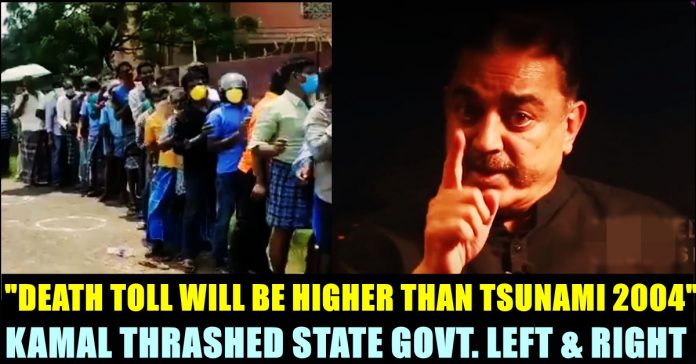 Kamal Haasan who earlier wrote a long letter pointing out the blunders made by the central government in handling the pandemic situation, now came up with another letter to convey an important message to the people of Tamilnadu regarding the reopening of Tasmacs which took place today across the state except red zones.

As the state reported 527 positive corona cases on Monday, the Tamilnadu government had announced the opening date of Tasmac. Today, on Thursday, the state has reported 580 new positive cases which increased the total number to 5,409. So far 37 people in Tamilnadu died of the virus which killed more than two lakh fifty thousand people across the world.

Now, in his letter to Tamilnadu people, Kamal Haasan has accused the ruling government for opening Tasmac and ruining the lives of poor and needy. He also accused the Tamilnadu people for exchanging their votes for money. He said that people of the state deserve such government for selling votes during election period. He also blamed those who failed to vote during election period and demanding for justice now. In his letter, the “Naayagan” actor said that politicians who are ruling the government are very much aware about the income they are going to get through selling liquors.

“Just to get their usual but illegal cut and to distract the suffering populace from asking embarrassing questions, our listless government has taken this decision.” his letter read. He also mocked the leaders of this government for calling themselves as mother’s government while the children of Tamil nadu are threatened with starvation.

The “Makkal Needhi Miam” president compared the booze bottle with both the bell and the feed in Pavlov’s theory. In his statement, Kamal said that the politicians of this ruling government provided free pure gold Thaalis to the brides in Marriage functions, knowing that the groom would sell it to buy alcohol in future.

“I know my voice is a bit shrill. The tsunami that killed many of my folks will pale against the alcohol flash-flood the Thamizh nadu government has unleashed on my unsuspecting populace during the times of COVID” his statement further read. The actor slammed government for committing a crime by opening the Tasmacs. He warned the ruling government of probable intentional genocide.

“I beseech my people to do away with criminals for governance. You can do that magic my people of Thamil nadu” his statement said.

Today, the Tasmac outlets which got closed by 5 PM, has collected Rs. 150 crores by selling liquor in the first day. The official press release of the Tamilnadu government has stated that they took this decision as they couldn’t control the enormous number of people who crossed borders of other states to get liquor bottles on Monday. It further said that the Tasmacs in containment zones will remain closed.

Comment your views on this letter of Kamal Haasan to the people of the state !!