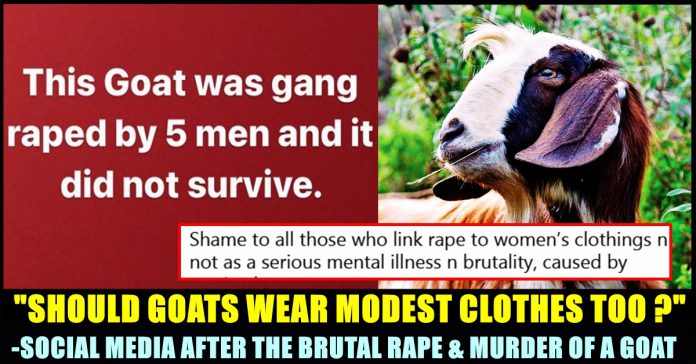 On Tuesday, Police booked five men for sexually assaulting a two year old female goat and killing her and the officials from hospital have confirmed that the animal was physically tortured. The horrific incident took place in Okara, a district in Pakistan. Angered public, questioned Pakistan’s Prime minister Imran Khan whether the Goat should have wore decent clothes to prevent herself from getting raped. A First Information Report has been registered against the five accused who raped the Goat before killing.

The Police report said that the five men untied a labourer’s goat and took it to a compound which located nearby. Reports suggests that the suspects raped the animal, tortured it physically and killed it. The matter came to light after the owner of the Goat lodged a complaint in the police station and it has been reported that the locals found the suspects fleeing the sport after committing such an heinous crime.

An FIR has been lodged in Okara for a gang rape and murder. Not of a woman, but a goat.

Five robots who were enraged to see a goat wander around without any decent clothes on. pic.twitter.com/RwWKyBHZYe

One of the suspects named Naeem untied the Goat which was tied in front of Azhar Hussain’s house who owns the animal. After they raped the animal by taking it to the nearby compound, A police team shifted the animal to a live stock hospital, The medical report confirmed that the Goat was raped before it was killed.

A case under sections 377 [unnatural offences] and 429 [mischief by killing or maiming cattle, etc., of any value or any animal of the value of fifty rupees] of the Pakistan Penal Code has been registered. It is reported that the suspects are on the run and Police officials had assured their arrest to the media. Meanwhile, users of social media got enraged by the incident and has been questioning whether the Goat should have wore a decent cloth to prevent herself from getting raped.

Activist Sheneira Akram uploaded a post questioning the brutality in her official Instagram handle. She shared a picture of a goat and said that it may arouse some to mock the rapists.

A Pakistani actor named Mathira asked whether the female goats also needs to wear Abaya in her post. “gang rape and murder of a Goat 🤬 Do naked animals have impact on men too ??? Now handsome PM will ask goats to cover themselves because some innocent men got aroused seeing them around as they are not robots.” a social media user wrote out of frustration.

Check out some of the reactions that surfaced in Internet below :

Five men gang rape a goat in Okara. I want to ask @ImranKhanPTI how did she entice those men who were clearly not robots.

gang rape and murder of a Goat 🤬
Do naked animals have impact on men too ???
Now handsome PM will ask goats to cover themselves because some innocent men got aroused seeing them around as they are not robots.#JusticeForNoor #okara #JusticeForNaseemBibi #ZahirJaffar pic.twitter.com/Fi4GwWPuIq

''Men are not Robots, If Goats keep roaming around, it will definitely have an impact 😕
FIR on gang rape of a Goat in Okara#Okara

A goat died, after being raped by 5 boys at Okara.

Shame to all those who link rape to women’s clothings n not as a serious mental illness n brutality, caused by patriarchy. pic.twitter.com/JkQma5nhhI