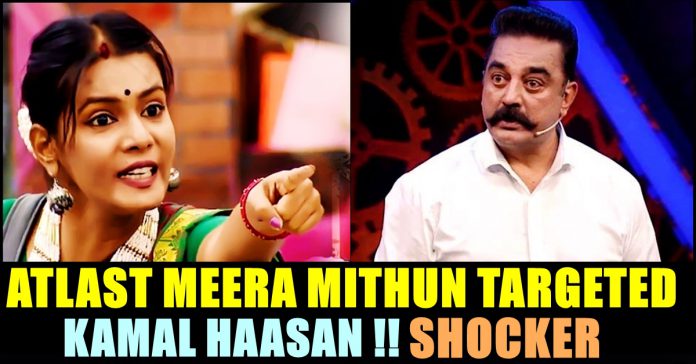 If you are aware of Bigg Boss show’s third season in Tamil, you must have known about Meera Mithun , one of the most controversial participant of the show. One of the highly controversial episode of the season is undoubtedly the one in which Meera Mithun accused Director Cheran of physical harassment. She said that he caught hold of her hip and behaved very rudely while performing a task. In the very weekend, She was treated with a “Kurumpadam” by Kamal Haasan who supported Cheran and said that he is not that sort of a person.

Followed by her Bigg Boss stint, the scenes of Meera Mithun from Sivakarthikeyan’s Namma Veetu Pillai was removed and the actress reported about it in her twitter account. Now the actress was removed from one more movie directed by “Moodar Koodam” fame Naveen kumar.

The film which is being produced by Amma creations T. Siva, has Arun Vijay and Vijay Antony in the lead. The makers initially announced that they are having Meera Mithun in a significant role. Now Meera Mithun posted a tweet saying that Akshara Haasan has replaced her role in the film which was titled as “Agni Siragugal”.

She doesn’t stopped there but went on to accuse Kamal Haasan for using his influence to make her daughter cast in that film. She says that Kamal Haasan is the one who recommended his daughter to act in the film and asked them to remove her from the project.

“So it’s clear now nepotism at its peak in #Kollywood and the clout of
@ikamalhaasan ensured iam out of this movie and his own daughter is casted in this movie and dosent she feel guilty of the same and
@[email protected] ur double standards are exposed.” Meera Mithun wrote in her tweet.

So it's clear now nepotism at its peak in #Kollywood and the clout of @ikamalhaasan ensured iam out of this movie and his own daughter is casted in this movie and dosent she feel guilty of the same and @NaveenFilmmaker @TSivaAmma ur double standards are exposed. https://t.co/tTWIEVAUJc

Akshara Haasan is celebrating her birthday today with the film crew. She made her Kollywood debut with Ajithkumar’s Vivegam and was last seen in her father’s own production “Kadaram Kondaan”.

It is notable that recently an audio conversation of Meera Mithun asking one of her workers to spread video of herself with Mugen went viral. “Only after completing the job, I will transfer the money we talked earlier. Now videos like that are doing rounds in Instagram. I want you to add the song he sung in the voice over and add videos of me spending time with him. Do it faster and within tomorrow.” Meera ordered Alex in the audio. SHOCKER : Leaked Audio Of Meera Mithun Targeting Mugen Goes Viral !! MUST CHECK !!

What do you think on this accusation of Meera Mithun ?? Comment your views !!