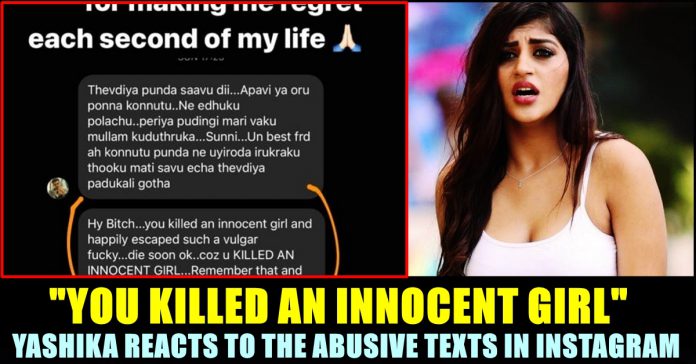 Yashika Anand logged into her official Instagram account after the tragic accident and reacted to some of the personal messages she received from her followers. The actress who is currently getting treatment for her injuries, came up with a series of stories expressing her emotions for the first time after the accident. As soon as the actress entered Instagram, messages from her followers seems to have flooded her inbox. Many blamed the actress for the demise of her friend Pavani’s demise.

An Instagram user sent a message to Yashika abusing her saying that she killed Pavani who is an innocent. “You could have died for killing a best friend of yours” the user said by abusing her with bad words. “You killed an innocent girl, remember that and die” the user said through his message. Capturing the screen shot of his comment, Yashika said “Thank you social media for making me regret each second of my life”

Here’s the screen shot of her story :

The actress also shared the screen shots of the positive messages she received from her followers and thanked them.

“And for everyone who is praying for me, Love you all !! I don’t really wanna live but you guys give me hope. I will be back soon, Take care” Yashika said through one of her stories.

Through a series of stories, Yashika expressed how much she misses her friend Pavani who died in the car accident. She also asked her fans not to celebrate her birthday and said that she won’t be celebrating it this year. Requesting her fans to pray for Pavani’s family, Yashika said that it the biggest loss of her life.

“I really can’t express what I’m going through right now ! I will forever feel guilty to be alive !! I don’t know if I should thank god for saving me from that tragic accident or blame god whole my life for taking away my bestest friend away from me really miss u each second Pavani. I know? you can never forgive me !! I’m really sorry I put your family in such a horrible sifuation. Just know I miss u each
second and I’m forever guilty to be alive. Hope your soul rests in peace. I pray you come back to me
Hope someday your family forgives me ! I’ll forever cherish our memories paw!” Yashika said in her story and said that she will not be celebrating her birthday this year.

The former Bigg Boss contestant is currently getting treatment after meeting with an accident that took place in the midnight on East Coast Road near Mahabalipuram. The actress’s friend named Valli Chetti Pavani who travelled with her died on the spot. The car, reportedly swerved from its path and struck the median strip and the images of the damaged vehicle were doing rounds in social media platforms.

People who were near, rescued them and rushed them to the emergency care unit at Poonjeri. Valli Chetty Bhavani was declared dead and the other three are getting treated at the hospital. Reports suggests that Bhavani was sitting in the front seat whereas the other two travelling by sitting in the rear. Yashika suffered injuries to the neck and fracture to the hip. The two other men are safe with minor injuries, reports said.