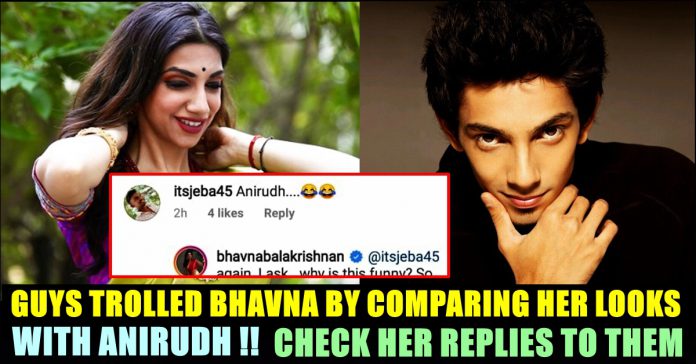 Tamil TV stars are also coming across such awkward comments from their followers. Some would neglect such comments and the others would give fitting replies right away to teach a lesson to that kind of trollers. TV anchor Bhavana who is known for hosting cricket shows in Star Cricket and reality shows in Vijay TV is the recent one to face insensitive comments from her followers for one of her recent.

The TV anchor who recently hosted “Master” audio launch, uploaded a promotional post in her official Instagram account. She who enjoys more than three lakh followers in Instagram, asked them to visit a Saree shop to check out their collections. Check out her post below :

Don’t you love simple sarees and statement jewellery? For all of us who are stuck at home, go to @vidya_vibasarees and check out their collections! (insta and Facebook) Note : I’m wearing an ahimsa silk here, which is like a vegan saree. This is the silk that is scraped off the silkworms cocoon without harming it. Paired it with this beautiful neckpiece that steals the spotlight 🙂 . . . . Photographed by @satz.photography . . . #ootd #potd #saree #sareedraping #mood #model #jewellery #necklace #traditional #outdoorphotography #photoshoot #vjbhavna #pose #diva #silksarees #ahimsasilk

Though many expressed their love towards the post after seeing her in Saree, few of them commented by writing music director Anirudh Ravichander’s name, in a way of trolling the actress. For a very long time, Netizens are comparing the looks of both the celebrities in social media platforms. Since “Master” audio launch, the trolls and memes started taking over the Internet.

Shooting Spot pic.
Its Anirudh for his next movie "Remo 2"
Hats off bro 👏👏
We thought it's Bhavana. What a Change over mama.

Now, to the comments which trolled her by referring Anirudh, she replied right away by questioning them back. Check out her replies below :

Comment your views on the way Bhavna seeing the trolls !!