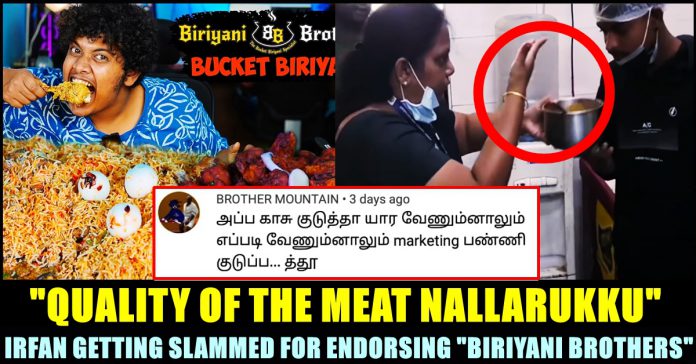 Comment section of food reviewer Irfan’s one of the old videos is currently getting filled with hate comments as one of the restaurants he endorsed got accused of providing expired food items to its customers. The restaurant named “Biriyani Brothers” which is located between Tambaram and Velacherry, got accused of having a stock meat of 45 kgs in their kitchen and the authorities had stopped the restaurant from functioning temporarily. It all started after a 10 year old kid Roshini died due to eating Biriyani at a hotel named 7 Star Biriyani that is located at Aarani, Thiruvannamalai.

It has been reported that Biriyanis that were made of expired meat were served to the customers. After the arrest of 7 Star Biriyani’s owner Baadshah and cook Muniyandi, food safety authorities started conducting inspections at the Biriyani restaurants across the state. Food safety officers of Kanchipuram district conducted inspection at “Biriyani Brothers” restaurant which is located near Tambaram.

Officers confiscated expired meat, eggs that were boiled a day before and non-standard food items from the hotel. They also ordered to close the shop temporarily. “We have destroyed 45 kgs of expired food items from this hotel alone. Even 50 plus eggs which were boiled yesterday are ready to be served for the customers. We have issued a legal notice to the owner, pointing out the flaws of this restaurant” said Anuratha, Food safety officer.

Reports suggests that officers got shocked while conducting inspections at the restaurants that are located in Chennai as they found meats are artificially coloured to attract customers. Meanwhile, a number of youtube users started marching towards a two month old video uploaded by popular food reviewer Irfan who endorsed the Biriyani of “Biriyani Brothers” in his Eid special video.

Irfan who enjoys 25 lakh plus followers for his “Irfan’s view” youtube channel, uploaded the video with a title saying “Bucket Biriyani from Biriyani Brothers – Eid Special – Irfan’s View”. In the 14 minute long video which was uploaded on 20th of July, Irfan could be seen endorsing the quality of Biriyani that was being made in “Biriyani Brothers”. He who receives Biriyani from the restaurant to his home, at one point, says that the quality of the meat is good in his video.

Now, as soon as the news on Biriyani Brother’s surfaced in Television channels, many started flooding the comment section of Irfan’s video, complaining about the food quality that is being maintained in the restaurant which has branches across the world.

“Hope you seen Briyani Brothers issue in News channel they are paying you guys for promotion and they are serving worst food for customer 😭 instead of spending money for promotion they should focus on quality food 😭” an online user commented in Irfan’s video whereas another one wrote “என்ன கெட்டு போன பிரியாணிய இப்படி தின்றான் 😂😂😂” to troll him.