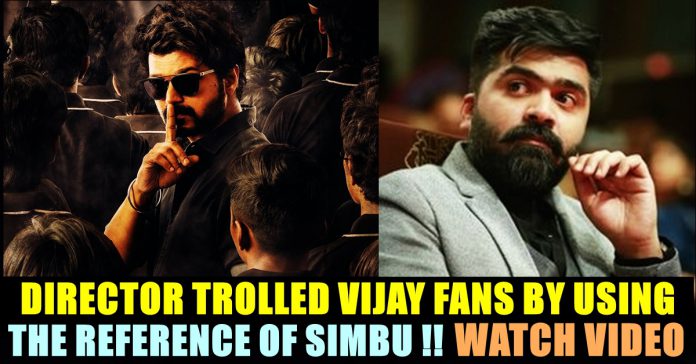 After the second look of “Master” released, fans of actor Vijay are eagerly waiting for the teaser of motion poster of the film to release. They have been demanding for an update about the film film to everyone who are associated with the 64th project of actor Vijay. Few months ago, the film commenced with a customary pooja in Chennai with Vijay, Vijay Sethupathi, Malavika Mohanan and Shanthanu Bhagyaraj and the rest of the crew in attendance. Directed by Lokesh Kanagaraj, the film is touted to be a gangster flick with Vijay Sethupathi playing the villain.

The first look impressed the fans and followers of Tamil cinema as it broke the stereotypes of first look posters. Unlike other first look posters of actor Vijay, this one didn’t give any idea about the plot or genre of the film. The “blurred” effect was added in a way to tell the fans that it is going to be a director’s movie more than the actor’s.

The second look posted also featured actor Vijay alone while the fans expected Vijay Sethupathi to take place in it. It had the lead actor donning a black dress with cooler with finger in his lips in way of telling the students in front of him to keep quiet. In other perspective we can also assume that the actor is warning his enemies who are intended to cause trouble to the students who are standing around him. It also seems to be a graduation day as all the students were seen wearing black dress.

Now the fans are demanding for the next update and director Rathna Kumar who works in Master as additional screenplay writer has replied to them. Rathna kumar is known for directing films like “Meyaadha Man” and “Aadai”. The filmmaker, in a way of trolling the fans who asked for update, posted a popular video of actor Simbu’s press meet where he would ask the reporters to wait through hand gestures. It seems many fans filled his inbox with update requests.

However, Rathnakumar received a huge response with update requests for this tweet as well. The director indirectly says that he has been sending “Thumbs Up” emoji for those who are asking for update. Master is slated to release on this year’s April and the makers are currently shooting the final portions of the film.

What do you think on this reply from Rathna kumar ?? Comment your views !!