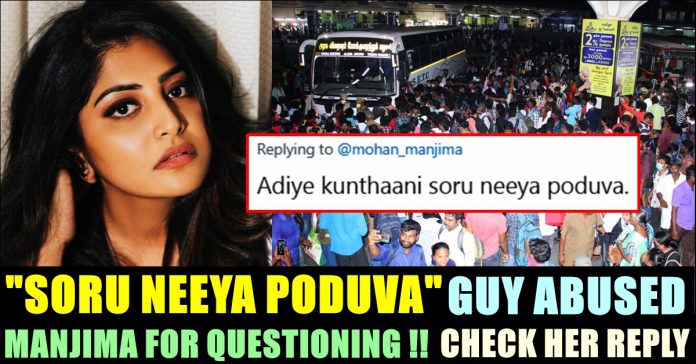 For requesting people to quarantine themselves at this situation, actress Manjima Mohan who is known for appearing in films like “Achcham Enbathu madamayada”, “Oru Vadakkan Selfie” got abused by a Twitter user. The actress stood by her decision and expressed how she is being treated for asking people to stay at home. Days before Manjima shared how people laughed at her for wearing safety mask in public. (People Laughed At This Tamil Actress For Wearing Mask To Be Safe !!)

Being precautionary is the only way we can save this world right now. Implementing safety measurements will save not only us and our loved ones but also the entire society we live in. Right from political icons to cinema celebrities, everyone are suggesting people to stay at home by washing hands 10 times a day due to the threat of the deadly virus Corona.

On seeing a tweet on people not obeying the government orders about staying at home, Manjima who got frustrated questioned why people are finding it hard in staying at home. “I still don’t understand why people are finding it so difficult to stay at home!! JUST STAY AT HOME!” the actress said while replying to a tweet of journalist Shreedhar Pillai.

I still don't understand why people are finding it so difficult to stay at home!! JUST STAY AT HOME! https://t.co/pKf1cnuNVo

To this tweet of the actress, one of a Tamilnadu based twitter user abused the actress with a curse word and asked if she is going to feed him in a way of mocking her. Here’s his reply :

Manjima who saw this time, took time to reply to it. The actress who said that she would ignore such tweets, showed it to her followers to let them know what kind of replies she is receiving for asking people to stay at home. To the abuser, Manjima said that it is not easy for herself to stay at home. “Money doesn’t fall from the sky for us!” She said in her reply.

And then we have people like this! I usually don't reply to these kinda tweets but this is what I get for asking people to stay at home. If you thinks it's easy for anybody to stay at home without going for work you are wrong bro! Money doesn't fall from the sky for us! https://t.co/U3RMzXegqv

He changed his username to “Stay at home like Manjima said” after getting a reply from the actress. To another user who said that he has debts and EMI’s to pay, Manjima said that she has them too. “What makes you think we don’t have loans and EMI? Just because we don’t talk about it, it doesn’t mean that we don’t go through that.” said the actress and asked the user not to bring professions into humanity.

What makes you think we don't have loans and EMI? Just because we don't talk about it, it doesn't mean that we don't go through that. Everybody has their own problems and this is not the time to measure that. Humanity has nothing to do with our professions:)

Followed by this, she also said that government is aware of the situation and it will help the daily wagers.

I completely understand that. And I am pretty sure our govt knows it too. We need to give them sometime to figure all that out. By stepping out they are risking their lives too.

Comment your views on these confrontations Manjima is facing for asking people to stay home !!