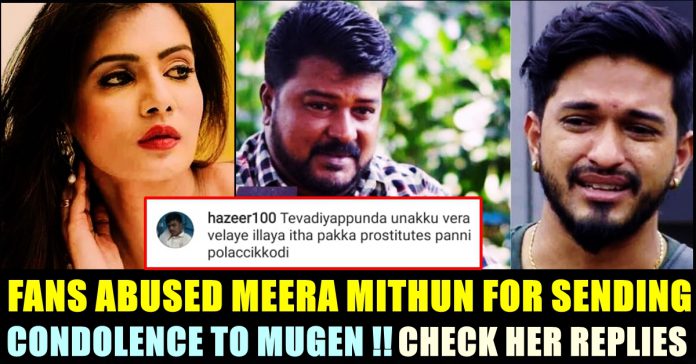 “Be Brave Mugen, ✨ Everythng happens for a greater realm of spiritual reason. Am always ter for you. Call me anytime ( Edwin has my number ). Ur born to win.” read the post of Meera. Check out her post below :

Be Brave @themugenrao ✨ Everythng happens for a greater realm of spiritual reason. Am always ter for you. Call me anytime ( Edwin has my number ). Ur born to win.

Many of Meera’s own followers started criticizing the model for posting message to Mugen. She even happened to face abuses from the users of the photo posting social media app. “U could have said it personally…why would you post it in an social media?” asked one of her follower. “When we both are not following, personal messages sent ll be hidden in request form, and out of all messages, my mess to him ll not reach !” replied Meera.

Check out the screenshot of their conversation below :

Another user abused the aspiring actress with obscene words for no appropriate reason to which Meera simply replied by saying “i know to work hard and earn. Thanku”

To the one who asked why she is pouring love on Mugen all of a sudden, Meera Mitun replied by sending a middle finger emoji.

Earlier, a phone call audio recording of Meera Mithun asking someone named as “Alex” to spread videos of her with Mugen was leaked. The leaked audio conversation went viral across the Internet which might be the reason behind these reactions from the users of Instagram. (Also Read : SHOCKER : Leaked Audio Of Meera Mithun Targeting Mugen Goes Viral !!) However it is high time for netizens to realize that it is not right to spew blind hatred towards an individual for what they did in the past, that too in an occasion like this.

The 24 year old Mugen Rao broke the stereotype and became the first contestant to win the title after winning ticket to finale task. By winning vast number of votes from the fans, Mugen received the recognition from Kamal Haasan. The heartthrob of Tamilnadu is expected to appear in big screen very soon.