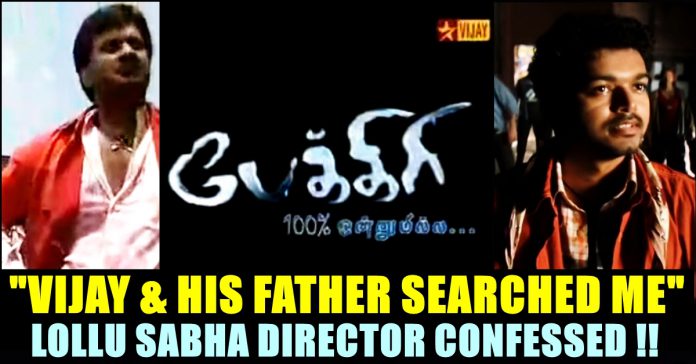 The main crew of popular spoof comedy show “Lollu Sabha” has revealed that actor Vijay and his father SA Chandrasekar searched for them for making an episode of “Lollu Sabha” trolling his 2007 film “Pokkiri”. The spoof was titled as “Bakery” and comedy actor Jeeva did the role of Vijay.

Actor Vijay is one of the very few actors who has huge fan following in South India. Having acted in more than 60+ films, he is in the top race to become the highest paid actor in Kollywood.  The incident shared by the Lollu Sabha crew about the actor who is being loved by crores of fans, is now trending in Internet.

Lollu Sabha show which was telecasted in STAR Vijay, streamed during 2004-2007. Each episode of the series was a spoof of a Tamil feature film or television show. The show garnered excellent response from the Television watching audience. Comedy actor N. Santhanam, Swaminathan, Yogi Babu and Jangiri Madhumitha are widely considered as few of the best finds of the show which lasted 156 episodes.

The movie spoofed many blockbuster movies such as Padayappa, Pudhupettai, 7G Rainbow Colony etc. The episodes that are streamed in the television back then are now available in youtube platform which was till being watched by many people. In this recent interaction, director Ram Bala, Lollu Sabha Manohar and Lollu Sabha Jeeva participated and shared many interesting unknown facts about the show.

While talking about the consequences they faced for spoofing “Pokkiri” as “Bakery”, the trio said that actor Vijay and his father searched for him at that time. “When I came back from Vijay TV and asked my crew whether they got any scenes to spoof in “Pokkiri” movie, they said that there is nothing in the film. They said that there is only songs after fights in the film which couldn’t be trolled. With my personal experience during childhood, we started writing the spoof and shot it. But I never expected it to turn out as such a biggest issue” said Ram bala while explaining the incident that took place years ago.

“After it got telecasted, we received a phone call from a Vijay Tv official. He asked me to reach office immediately and I asked what the problem is. That is when I came to know that actor Vijay and father were searching for me for trolling “Pokkiri”. They might come now if they know my address” said Ram Bala who added that they would have forgotten it now.

Adding o to that, Jeeva said that actor Vijay is a big fan of Lollu sabha show. “He watched several episodes of Lollu Sabha. As a effect of it, I acted in his film “Kuruvi” as well.” said Jeeva to make sure that Vijay is not angry with them now.

As soon as the video got surfaced in youtube, fans are sharing it in various social media platforms. Comment your views on the things shared by “Lollu Sabha” crew !!