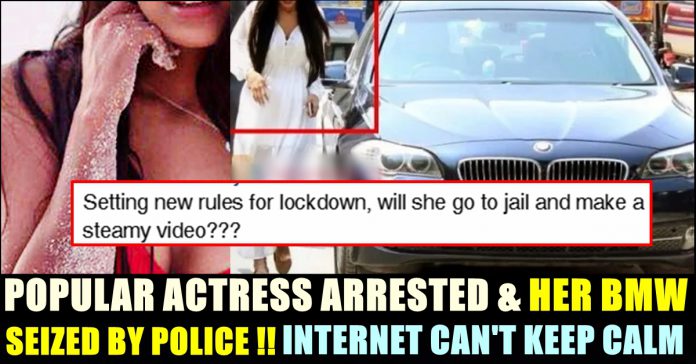 So far 67,152 positive Coronavirus cases has been reported in country India and 2206 people died to the virus which killed 2, 84,198 people so far. Country India is strictly following the norms of social distancing to avoid the spread of the deadly virus in the country which has more than 135 crores of population. Citizens of the country are staying at home for nearly 50 days as of now to avoid getting infected. People are advised to come out of house only for essential purpose and ordered not to roam around without valid reason. Many arrests are being made and vehicles are being seized against people who are violating lockdown rules. Now, popular actress Poonam Pandey who is known for her controversial statements has been booked by police for violating lockdown rules.

The actress and her friend were booked by the Marine drive police on Sunday. The two were detained and their BMW 5 series sedan car was seized, according to reports. Her friend was identified as Sam Ahamad Bombay (46), a filmmaker and a resident of Bandra. Around 8 :05 pm on Sunday, they two were roaming around in their BMW car.

Deputy commissioner of Police Zone 1, Sangramsingh Nishandar confirmed tht Pandey and her friend were detained for violating lockdown restrictions and released later with a notice. A case under the Indian penal code sections 188 (Disobedience of order duly promulgated by public servant), 269(Negligent act likely to spread infection of a disease dangerous to life) and relevant sections of the National disaster management act has been registered against the actress. The Police who are not satisfied with her answers to them, saw her wandering outside without a valid reason which made them to file case against the actress.

Poonam Pandey is an Indian glamour model and film actress, known for her works in Bollywood and Telugu cinema. Poonam is also known for making extremely bold videos and photoshoots. In fact, she had risen to fame by announcing that she would pose nude if India won the 2011 World Cup. Although India won the title, she eventually did not perform the stunt saying that BCCI did not permit her to do so. However, this act had given her instant fame.

Now, this news of her arrest made Many of the users of social media to react in various ways. She even trended in Twitter at no.1 for a while for making the headlines. Check out some of the reactions here :

People can't bear the blistering heat of Mumbai and she adds up to it.

Hope #mumbaipolice don't punish her and ask her to dance, the way UP police did who were found loitering#PoonamPandey u r innocent. Hope u were not drunk.

You can't lockdown #PoonamPandey – she finds a way out, ends up being arrested. pic.twitter.com/NxWuP1V3pW

#PoonamPandey
Setting new rules for lockdown, will she go to jail and make a steamy video???

Comment your views on Poonam trending at no.1 for this issue !!