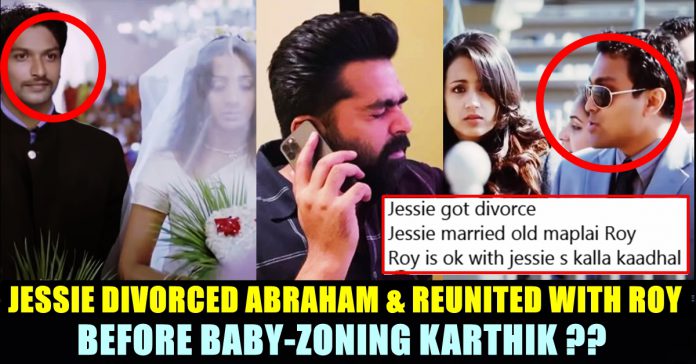 Amidst the “Karthick Getting Baby-zoned” memes and trolls, a new question aroused among the netizens regarding which zone Abraham and Roy belongs. The team “Vinnai Thandi Varuvaya” which consists biggest names of Kollywood such as A.R Rahman, Gautham Vasudev Menon, Trisha and Simbu came up with a 13 minute long short film to address the current pandemic and to give a hint about the sequel of the 2010 blockbuster.

The short film which released on Gautham Menon’s official youtube channel “Ondraga Entertainment” is trending at number 1 in the video streaming platform right now with more than 5 million views. Fans of “Vinnai Thaandi Varuvaya” couldn’t keep themselves calm as they felt nostalgic on seeing this short film in which two lead characters Jessie and Trisha are having a conversation over phone.

Titled as “Karthick Dial Seitha Enn”, the short film focuses on the writer’s block faced by Karthick, a filmmaker by profession. To help himself to write his script with a peace of mind, Karthick calls Jessie, a mother of two children and seeks her help. He asks her to love him like she did before which helped him to write his debut film “Jessie”. She who hesitates initially goes on to talk her heart out to her ex-boyfriend. She confesses to Karthik that she fell in love with her now-husband Roy after watching “Mowna Ragham”and had babies with him four years later. Jessie goes on to say that she is very much fond of Karthik and tries to make him understand that she sees him like her third child as she already has two children with Roy. This is where people who watched “Vinnai Thaandi Varuvaya” got a bit confused.

In the climax of the 2010 version, Jessie would say that she got married to a man named as “Abraham”. Only because of Abraham, Jessie wouldn’t talk with Karthik in New York. However, while making his love story as a film, Karthik would change his climax as a positive one where Jessie would reunite with Karthik.

The name “Roy” Jessie using in “Karthik Dial Seitha Enn” to mention her husband, was used in “Vinnai Thaandi Varuvaya” to mention the guy in Church. Watch the scene here :

Now, Netizens who watched both “Vinnai Thaandi varuvaya” and “Karthick Dial Seidha Enn” got confused and shooting questions on whom Jessie really got married to. “Jessie rejected Roy in that church and she married Abraham. Wtf you gonn tell me now his name was Abraham Roy????? “ wrote one of a twitter user to express his confusion. Check out some of their reactions below :

Jessie rejected Roy in that church and she married Abraham. Wtf you gonn tell me now his name was Abraham Roy?????

Yo!
His full name is Roy Abraham Menon

thn, Abraham must be her 4th child 😅#KarthikDialSeythaYenn

Many of the things that worries Karthick in this “Karthick Dial Seidha Enn” seems to be the problems faced by GVM himself in his real life. Starting from writer’s block to theatres shut down, the resemblance of the filmmaker’s real life is very much evident in his short film. However, after having this conversation with Jessie, Karthik finishes writing a script on Kamal-Kadhambari’s love which is Gautham’s one of the next projects.

Now, whom do you think Jessie got married to ?? Comment your views below !!